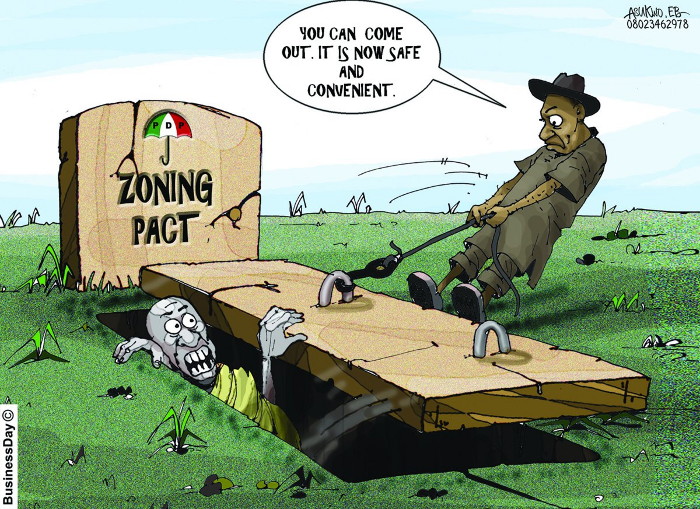 A cartoonist's impression of it at a point

Isn’t the Turbulent Career of Zoning Becoming Too Costly for Nigeria?

Posted By: adminon: October 06, 2021In: De-EscalationTags: No CommentsViews:
Print Email

When the concept of Zoning was advanced by technocrats of the now dead National Party of Nigeria, (NPN) in 1978, it was instantly labeled a conservative agenda. Radical activists and the members of what later became the progressives (the opposition parties in the Second Republic) mocked it. But the ideologues of the NPN such as the late Dr. Ibrahim Tahir, Adamu Ciroma and Dr Chuba Okadigbo stuck to it. In fact, Chuba Okadigbo went on to write a book on the party in which Zoning was an aspect of. But Zoning has always come under attack. 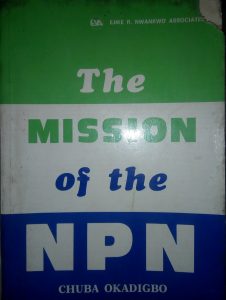 Let’s use the stance of the opposition parties in the Second Republic as the first fire that Zoning encountered. Very colorful politicians such as Muhammadu Abubakar Rimi and, in fact, the People’s Redemption Party, (PRP) had nothing but utter contempt for Zoning. As far as they were concerned, it was an NPN stuff and it was feudal. It went on to the point that the NPN intellectuals rarely defended the concept openly but which is not to say they reclined from it. They never did. In 2006 in a very elaborate interview, Ibrahim Tahir led this reporter into a sophisticated justification of Zoning and the position of Presidential Liason Officer, (PLO) that the NPN was practicing under Shagari. It made eminent academic sense but whether Tahir successfully communicated it to the Nigerian masses that way is a different thing. Unfortunately, neither Tahir, Okadigbo nor Mallam Adamu Ciroma is here with us anymore.

The second fire Zoning encountered might be when Chief MKO Abiola sought to rupture it from within the NPN. He sought to contest the NPN Presidential ticket in 1983. It would have followed the principle of North and South that Zoning advocated but it would have shorts rifted a second term for Shagari. The move turned Abiola’s demise in the party after he had to storm out of the NPN Convention in Kano where Shagari was eventually re-elected by the party. The heat was so much, including Umaru Dikko’s pre-Convention media statement that the NPN presidential ticket was not for sale to the highest bidder.

It is not clear whether General Shehu Musa Yar’Adua and the Kaduna Mafia were fuelling Abiola against Shagari. It is very unlikely since the Yar’Adua group (the Kaduna Mafia) had entered an alliance with Chief Awolowo’s Unity Party to deal with Shagari. Unknown to Awo and Yar’Adua, NPN planned ‘big’ for the 1983 Presidential poll. According to General Buhari who overthrew the NPN eventually, the NPN did the most rigging because every party rigged in that election relative to its capacity. As the party in power, NPN was the richest. Instructively, Buhari’s first official visitor in Dodan Barracks where Nigeria’s Head of State lived in Lagos was General Yar’Adua. It is among the evidence pieced together by the late SG Ikoku to conclude that the 1983 Coup was the conclusion of the long running struggle for power between the Shagari group and ‘Kaduna Mafia’ within the NPN.

The next storm Zoning would run into was under Abacha. After having successfully represented the June 12 crisis as a Northern plot against the South, Southern politicians insisted the idea of Zoning must be formally put in the Constitution. In fact, strong actors such as Chief Olu Onagoruwa declared that putting Zoning in the Constitution was the reason he would disregard all voices dissuading him from joing the Abacha Government. And he was basically successfully because Zoning was endorsed in the Abacha Political Conference in 1995 and written into the Constitution. It was the Abdulsalami regime that removed it and said it should be a party decision rather than an item in the Constitution. By then, Abacha had died of course. If the provision had remained in the Constitution, the conceptual career of Zoning might not have been this turbulent and Chief Onagoruwa might be less pained for all his loses in that effort on Zoning.

It was in 1998 that Zoning encountered another stress again. The NPN elements who were somehow intact convinced the coalition members that formed the People’s Democratic Party, (PDP) to give Dr. Alex Ekwueme the job. Their argument is that once Nigeria was returning to electoral politics, the last elected president should be the lodestar. Since Shagari was no longer an active politician, it meant there was none other than Dr Alex Ekwueme who was his second-in-command. This was classic resilience of Zoning. It went well until the “IRA wing” of the PDP, to quote General Ibrahim Babangida entered the drama. The rest of it is now history, as they say. Instead of Ekwueme, General Obasanjo was elected on the platform of the PDP in 1999. The plot to get Obasanjo elected was so thick but sensitive that it disallowed victory for anybody who was opposed to Zoning or remotely connected to whoever was connected to such a person. The example of Alhaji Saminu Turaki’s victory in the 1999 gubernatorial election in Jigawa State is regularly cited to buttress this. According to the analysis, it was considered dangerous to allow Sule Lamido to win that election because if he did, Rimi whose second-in-command he was would have got a solid foothold in the club of governors. That would not be good for the arrangement. So, according to the theory, Lamido was ‘defeated’ but only to be used later to punish Rimi for his vocal opposition to Zoning by being appointed the Minister for Foreign Affairs believed to have been reserved for Rimi. Obasanjo’s election was still Zoning but not in the linear sense the survivors of the NPN saw it. But they fought bravely up to the Jos Convention where Obasanjo defeated Ekwueme. Adamu Ciroma was their commander.

Next bout of fire came in 2010 after the demise of President Umaru Musa Yar’Adua. In compliance with the constitutional provision that the Vice-President should succeed the president should the latter leave office for whatever reasons, Dr. Goodluck Jonathan had to be sworn-in to replace him upon his death. But that did not make Jonathan a Northerner whom Zoning gave eight years in power. Confusion broke out whether Jonathan could contest in 2011 or not. Again, the rest is now history. Jonathan contested and won but the division appears to fuel the controversy today. The late Adamu Ciroma felt it was robbing the North of its own share of the eight years stipulated. He fought a lot to ensure that, including the idea of a Northern consensus candidate in 2011 which Atiku Abubakar won against Gen Babangida. It didn’t fly against an incumbent Jonathan. In fact, as that fight wore on, the strange argument that Zoning was not even a national consensus but an arrangement peculiar to the PDP became common in the media.

The North’s first reaction against what they saw as Southern treachery was voting for Buhari in 2015. It never happened before that someone from Buhari’s tendency in the North ever got that popular. It would appear that the North, however it is defined, is still reacting to 2011. But must the politicians be allowed to tear down the country each time they encounter the consequences of their own opportunism and inability to be faithful to a national consensus? And is politics not about consensus behind the scenes anymore? Does Nigeria need all the sabre rattling going on? Isn’t this Zoning becoming too costly?