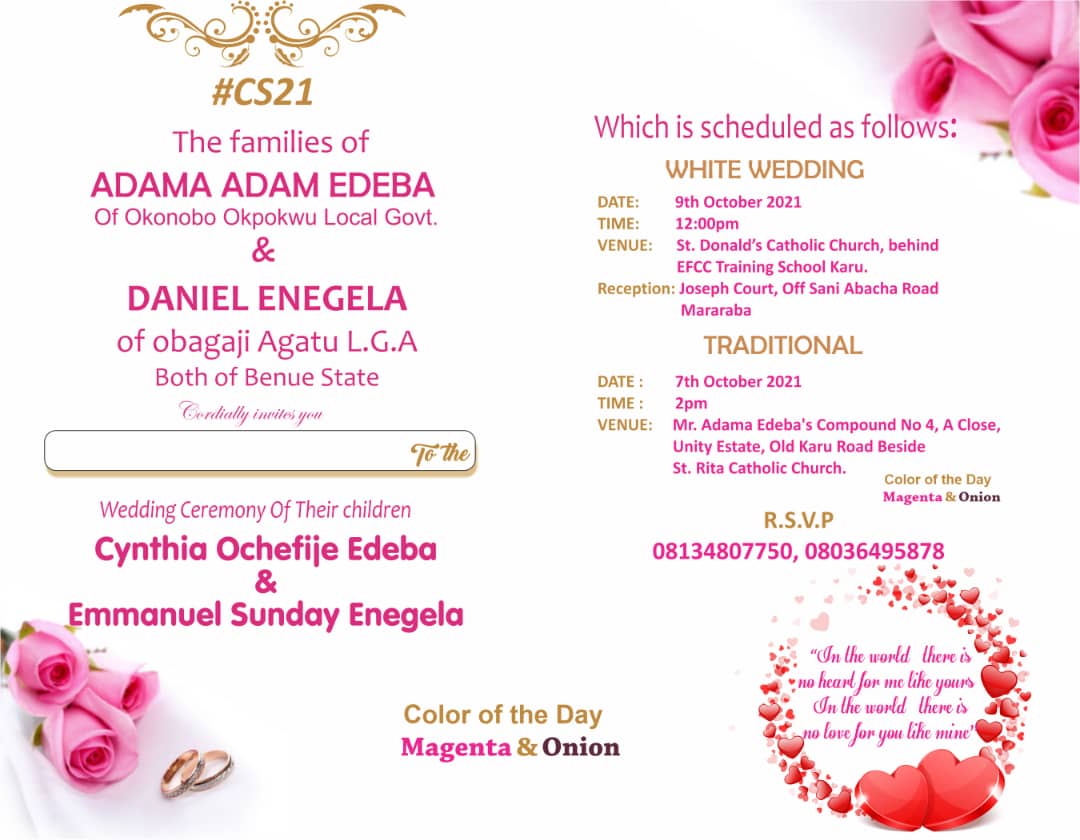 Strictly speaking, it is a boy and girl affair when Cynthia Ochefijie Edeba weds Emmanuel Sunday Enegela next Saturday, (October 9th, 2021). At that level, this is just another routine exercise in society’s reproduction of itself. But Cynthia, the bride, has a father who has an interesting Marxist pedigree. At the University of Jos where he undertook his undergraduate studies, Comrade Adama Edeba was part of the barricade generation, shouting stuff such as ‘down with imperialism’ and so on.

Then our brother left the university and went quiet. What had happened, his schoolmates began to wonder. But the last time Intervention spotted him and asked whether he is still a comrade or not anymore, he swore the ideals are irreplaceable. Nobody doubted him. He is a very genuine person. And a repudiation of the image of the Marxist as an anti-system person who is incapable of wife or family or children chauvinism or of romantic practicum. No, not Comrade Adama Edeba. If he is not wearing these on his skin, it is only a matter of upbringing and breeding against exhibitionism.

Look at the stylish invitation card. An image reader would find it exciting decoding the color messages. And the intricate color balancing game on the card.

The Comrade father might have no idea of the technicalities involved in all of that but if his daughter did it, does it not speak to the overall parental gaze? Even more so is an Edemoga girl going to Agatu to pick a husband. It can only be a fully parent guided choice. Otherwise, it doesn’t happen every other day, given the many micro ‘clash of civilisations’ within Idomaland even in the digital age. This is notwithstanding that there are no specific clashes between Edemoga and Agatu districts, both being two big yam belts in Idomaland.

In that case, our comrade is still at work in breaking down artificial barriers in line with one humanity that comrades preach! That effectively makes this marriage a project of the radicals but without prejudice to traditionalists, the core religious stakeholders and sundry interests who should bear witness to this crucial union!

Of course, two families are coming together in this union and each side is bringing something interesting to the table. However, it is the radical dimension that is receiving attention here yet for the reason already highlighted.