Prof Egbe, (2nd left), in an expansive mood with a graduate student at a recent university wide occasion. Also in the pix are Dr. Chika Eze in conversation with Dr Ekot, (backing the camera)

Celebrating, in the Critical Tradition, With Prof Gabriel Egbe

In a 3rd year class on Global Governance some two years ago, this teacher watched two female students provoke a debate on the ‘sins’ of traditional International Relations vis-à-vis the arrival of Global Governance in contemporary world politics. They did not just provoke it, they thrashed it out in a way that caught even the lecturer unaware. It came so suddenly that nobody in the class was prepared for it. And these were just 19 year old girls as at then. Now, if everything works out well, one of the two should be heading for a graduate program in Canada soon. It would have been best if all two or, in fact, if all the six eaglet Amazons in that class could go out of the country, experience a different intellectual climate before returning to Nigeria, probably to teach in Veritas University, Abuja. Financially, that is all day dreaming for some of them at the moment.

Now, this is just one such experience from one department in one of the private universities. Who can count all such plausible experiences that no one reports about but which must be going on across the private universities? So, the fact of their share of admission would pale into insignificance if the diverse outcomes from this category of universities were critically assessed. Such outcomes would include those who would otherwise still have been writing JAMB, struggling for admission into public universities; those who have graduated and even got a job; those who have graduated and set up something interesting or thriving and those who are clearly heading for the skies, intellectually.

What this background throws up is how it makes the key names, signifiers or actors unfolding on the private universities worth watching in relation to the innovations, themes, agenda and practices that might be observable from that domain. By the very nature of the university, no one individual can appropriate credit for success stories. However, it does happen that things coincide to give certain individuals visibility on certain campuses at one time or the other. Thus the late Prof Billy Dudley could be taken as signifying that for the University of Ibadan at a point, Dele Awojobi for the University of Lagos, Eskor Toyo for the University of Calabar, Claude Ake for the University of Portharcourt, Bala Usman for Ahmadu Bello University, Attahiru Jega for Bayero University, Kano, Festus Iyayi for the University of Benin. Some of these names cut through into reckoning for scholarly agenda setting, which is what Billy Dudley and Claude Ake would exemplify. Some did it through stubborn activism which is what Awojobi, Iyayi and Jega would speak to while some such as Toyo came through in terms of standpoint scholarship. And so on and so forth, this being a very convenient listing which leaves out many stars of that era.

Knowledge is all about voice. An emerging voice on an emerging theme? 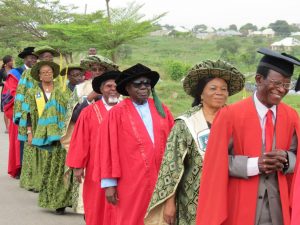 This is the context of this focus on Prof Gabriel B. Egbe who is popping up in Veritas University, Abuja, one of the privately owned universities. The provocation for this piece is something personal to Prof Egbe but there is a more powerful political move behind this piece. And it is the representational practice of power it contests. In other words, this is a protest piece against the indulgence of older or more established universities by the Nigerian media. The national media should extend its coverage of the campuses to little known or newer universities where things are also happening. It is no longer acceptable to start and end with UI, UNILAG, OAU Ife, ABU Zaria and those having big name or locational advantage.

No one is asking the media to give space to just about anyone picking corns on a campus. But it is only when they go round that they would find, for instance, someone who ended up delivering a university’s 1st Inaugural Lecture. The futility of heroism in a functional university means that, although an Inaugural Lecture is not subject of open hall interrogation, it does not mean that intellectual enemies didn’t do their job on the lecture and the lecturer. Intellectual enemies are no enemies in the dictionary sense of the word but those whose job is to expose those little, naughty gaps that always escape detection even by the most careful or sophisticated scholar. They are what intellectual enemies seize upon, such that even Marxism, about the only scientific theory in the social sciences, is today virtually crippled in methodological terms. So, surviving the Inaugural Lecture is a citation in merit. More so if the academic belongs to a department generally regarded as a strong one as Egbe’s Dept. of English and Literary Studies at Veritas University, Abuja is. And lastly, if he is also the one who came up with the advocacy for teaching students academic reporting verbs and similar skills as a way out on how the average students can effortlessly convey other people’s ideas without failing to credit original sources of such ideas. So far, no challengers have advanced contrary views and even if they turn it upside down as Marx did to Hegel, it would not erase Egbe from the credit list if the practice develops.

So, on purely scholarly strokes, Prof Egbe is one of those making his way into membership of the rising or successor generation of the big names we listed above, all of whom have departed. Keeping members or potential members of such a successor generation under critical media searchlight is good for the university system, the knowledge industry and the possibility of Nigeria’s discursive constitution of the world, a highly neglected area which the University of Ibadan is like trying to bring back through its impending 2021 Biennial Conference of the Faculty of Arts.

I take this as saying “Happi birthday” to Prof Gabriel Egbe in the critical tradition. I personally would be prepared to sing more happy birthday songs if the Dean could get the university to restore the Open Access forum where his piece on ‘discourse and development’ or some title like that was what took me to seek him out on arrival at Veritas University some few years back. That space seems to have disappeared at a time it is most needed. With an Editorial Board made up of scholars of serious standing from far and near, a Veritas University blogspace is the cheapest and fastest expressway into global scholarship than all these non-descript, backwater publications our VC, Prof Ichoku, derisively calls ‘Bwari Journal of this or that’.

The author, a member of the Editorial Committee of Intervention, teaches Political Science at Veritas University, Abuja