Storylines
Home NewsLog Could Buhari and Osinbajo Be Fighting? 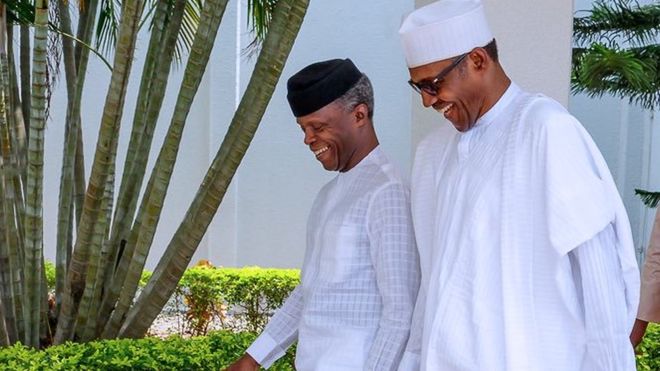 Could Buhari and Osinbajo Be Fighting?

It is still difficult to believe but it is no longer a safe attitude to dismiss such hints as nothing but gossips in Nigerian politics. For all we know, President Buhari and Vice-President Osinbajo might be in a conflictual performance. How such a fight might turn out can be the most interesting subject of speculation. 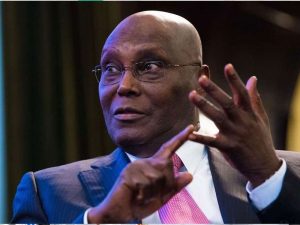 Scars of war all over?

Ordinarily, the thinking is that no set of president and his deputy in Nigeria will allow themselves the luxury of such a pure waste of time after witnessing how costly the Obasanjo-Atiku war between 2003 and 2007 was for the nation and to themselves. Although Atiku still continued his journey to his current status as an institution in himself, he would still admit that he would have been an even greater guy now if there wasn’t that conflict. Obasanjo would similarly admit that he too would have been better off if there was no war between him and his deputy. But that is in the past. What is not in the past is a Buhari and an Osinbajo re-enacting such in very similar circumstances, although this time, the substantive issue is not the Vice-President supporting or not supporting a self-succession agenda.

The speculation in town now is the Vice-President out-performing the president whenever the president hands over to him while on medical or whatever away matches. So, the gist merchants are saying that in one of his last trips outside, the big Baba decided not to handover to the smaller Baba. There was muted protests but muted protests are not usually heard unless by those who put their ears to the ground.

Until when open actions that tend to interrogate the Office and person of the Vice-President were announced last week, it remained so. Although a governor has been quoted as saying that the constitution of an economic advisory council is not an attack on the version that Osinbajo managed, that action is still read as one of the open actions. The directive about Osinbajo seeking presidential clearance on running certain institutions under him is another. And so on and so forth.

It is not clear if any groups or individuals in their critical senses would urge the two to fight on or fight to finish but if two adults in their position decide to fight, the rest of the country might have no alternative than to savour the tussle. That is if the country itself may not go down with the fight, being so deeply divided as it is today. Should the combatants decide to go ahead, how do they stand? 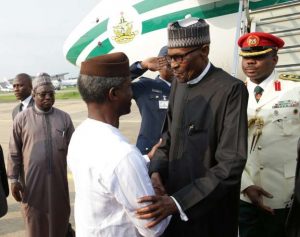 A David versus a Goliath of a pair?

This will be the tricky part of the entire diversion. Power or capability in war is a slippery concept. The president might, on the surface, have overwhelming advantage in the realm of coercive power over and above Osinbajo but would the president match Osinbajo when it comes to structural, institutional and discursive dimensions of power? The answer is no and a big no for that matter. If the overwhelming advantage of the Americans in coercive power over and above Afghanistan and Iraq didn’t help so much, then why would Buhari be an exception?  Still, there is nothing to suggest that Osinbajo would win without irreparable bruises he can do without, more so in a war of attrition that it would be and especially as Osinbajo is not as entrenched as an Atiku Abubakar was in relation to Obasanjo, for instance. Above all, given how Obasanjo and Atiku were subsequently forced by the diffuseness of reality to reconcile, would Buhari and Osinbajo still try it?

But the Nigeria that the two preside over today might push them into it. Bishop Mathew Hassan Kukah, for one, has been saying it that Nigeria itself is incapable of debating itself. In the past few years, that has turned out the most critical and reflexive point the Bishop must have made. In fact, the level of and direction of public sphere in Nigeria is such that if the country ever collapses or disintegrates, that would be the main push. Even intellectuals or people that could be labeled as such push so static notions of concepts and practices in a manner that is bewildering. It is such that Nigeria must be about the only country in the world today where a concept such as truth is an unproblematic category. In such a country, a president and a vice-president can, in spite of themselves, easily be pushed to war, especially if the interests at work present to them the chances that one party can prevail over the other. But that would be the tragedy. Historically, there is no such thing as victory or defeat without qualification. No strategic thinker would ever contest that unless he is a voodoo strategist. The cost of war to all parties is always prohibitive to all parties, before, during and after the war, even at the psychological level alone.

Of course, this assertion must anticipate the possibility that a Third World War between Buhari and Osinbajo could be good for Nigeria in a different manner. The APC would disintegrate, offering Nigerians relief from a very badly behaving party and regime. But what would be the contingency? A Government of National Unity, (GNU) could be but who would constitute it if the disarray that befalls the APC is so great that everyone is running helter skelter? 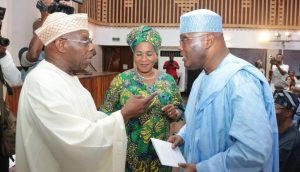 A picture from one of the reconciliation processes

Perhaps, it would be good if they sting themselves to death because there is very little chance that the APC can fundamentally take Nigeria anywhere in the next three years what they couldn’t do in four years. But that is their fight will not become everyone else’s fight unlike in the case of Obasanjo-Atiku when even some ministers rejected invitations to take sides, saying something like, “Sir, I came into this government when you and Atiku were great friends and I wish that can be restored rather than me taking this or that side”. Well, some people would say that Obasanjo is the greatest evil around but this particular minister was subsequently promoted to an even higher and more sensitive ministry by the same Obasanjo!

Anyway, might we have the privilege to invite combatants Buhari and Osinbajo to the ring?

Putting Hands Together for a Distinguished Wife

Daniel Yergin, the Oracle of Global Energy Politics, is Back With Another Book

My Experience as a Muslim Student @ Veritas University – Aisha Ismail