But for Facebook, it is doubtful if anyone would ever know when Mallam Yunusa Zakeri Ya’u, aka YZ, clocks an additional year on earth. It is not secretiveness or that birthday consciousness and celebrations contravene any dogmas but simply that such celebrations do not form part of his political socialisation. So, it was only Facebook that could put it on global display yesterday that he is a year older. The relationship between technology and human beings is one of the most fascinating areas of inquiry. Technology uses us as much as we use it although very few believe that technology uses us. We all think we are the ones using technology. Anyway, I mischievously sent a text to wish him a Happy Birthday to which he responded. It has been a long relationship, the origin of which one cannot recall immediately.

Suffice it to say that he was part of the core of mostly university based radical activists one always found oneself in their midst long before one ever became an undergraduate. That was always the case, whether as a radio journalist in the early 1980s or a reporter in Triumph Newspapers in the mid 1980s. In Kaduna, it was the late Abdulrahaman Black, who turned to journalism after his expulsion from Ahmadu Bello University, Zaria following the 1981 ‘Rice riot’. I served as the Director of his campaigns when he contested for the Chairmanship of the Kaduna State NUJ in 1984. It was a foregone conclusion that he wasn’t going to win because, while he was more or less an independent candidate, his opponent, Sada Mashi, came from the State Ministry of Information. With the probable exception of Lagos State because it is the headquarters of numerous media houses,  any such candidate will always emerge the winner because the typical State Ministry of Information almost always has more members than all the chapels in every state put together. But they knew they had an opponent in us. In moving to Kano from Kaduna, I found myself in the core earlier referred to. Kano was, indeed, the hub of radical activism, from the media houses to Bayero University, from labour unions right into the civil service. Kano was radical.

At that time, Mallam YZ, as everyone knows and calls him till today, had a brown Volkswagen Beatle which moved everyone about especially for political activism – lectures, symposia, press conferences, solidarity, etc. By everyone is meant very brilliant young chaps who all got either First Class or a very high Second Class Upper Degree and were retained as lecturers in their respective departments in Bayero University, from Engineering to Economics to Literature and what have you. But it is very rare you ever heard that they obtained First Class or such a result. For instance, it was only on August 26th, 2017 that i got to hear that Mallam Yakubu Aliyu had a First Class in Economics from Bayero University, Kano, partly the basis upon which he ended up at Oxford as a Rhodes scholar. Yet, it was he who gave me an intellectual induction into the undergraduate world of BUK before I entered the university. They were numerous but if you met one of them, you have basically met all. Bayero University, Kano was one concentration point. Later, the Triumph newspapers became another point. 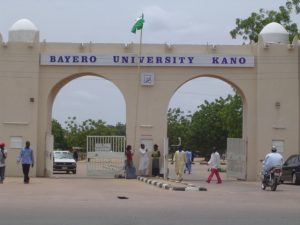 The dynamics worked out in such a way that one ended up eventually in Bayero University, Kano as a student. Entering the university at the advanced age of 26, the ambition was to finish quietly and get back to work. That never worked out as some of the comrade lecturers in BUK thought I would add value to the politics of the National Association of Nigerian Students, (NANS) if I became the Secretary-General since BUK was providing the Secretariat after Segun Maiyegun’s tenure from UNILAG. It contradicted both my personal inclination to quietly slip through the university as well as the arrangement I had with TSM, Chris Anyanwu’s magazine where I was working. I had resigned there to return to school but the late Ely Obasi who was the editor advised I withdrew the resignation. He was sure he could explain/convince Mrs Anyanwu so that I remained a staff but wear the tag of the northern correspondent and in which position I served the magazine’s interest while I was also a student. And that was what happened.

That is why I find applicable to me somehow what Abubakar Tafawa Balewa, the late and only Prime Minister of Nigeria so far told the editor of DRUM magazine in 1963. He said that “The people from the North, from the East and from the West have been kind and loyal to me … and I will prefer death to any situation that will force me to repay their act of kindness and loyalty to me with an act of evil”.  Mine wasn’t at the level the Prime Minister was operating but what Ely and Mrs Anyanwu’s intervention accomplished for me has the same value as what Balewa was expressing gratitude to all parts of Nigeria for. It meant I could go to school on a much more comfortable material and professional level as my salary remained intact and I lost only allowances and promotion.

Taking the NANS position completely challenged both the desire for quiet exit and the TSM arrangement but knowing that Y Z was central to the process made it difficult to argue otherwise. It had nothing to do with deference to an elder or benefactor. No such thing in that circuit. It was that if it came from any of them, then it was okay. So, when we see potential student leaders today campaigning to be elected into NANS executive, we shudder what the future would look like. Not only do they campaign to be elected, they have all manner of aides such as special advisers, personal assistants and so on. You wonder if they know where they are. NANS was planned to be a leadership recruitment and training centre, not a place to replicate the ills of the larger society. This current bastardization of organisational principles and practices reflecting the intellectual and ideological content of university education only managed to formally assert itself with the take over of NANS by the ‘Sergeant Does’ in NANS politics at the end of our tenure in 1994.

Anyway, being on the same campus, same political activist circuit and same house with Mallam was a different degree certificate on its own. Because it automatically meant mingling far beyond what it would have been if one were strictly a student. It meant one mingled with the academics as if one was one of them. He was absolutely popular both with the top and the bottom in BUK of the time. Both seniors and juniors, radicals and conservatives, respected him even though he was a member of the cabal of ‘trouble makers’. His popularity on campus had a trans-faculty character. This became national in 1994 at his marriage to Hajia Jummai Y Z, a woman beautiful in body and in soul. The ASUU top guns from all over the country were there in full force. In fact, Attahiru Jega, the then ASUU President came to look over the house before the H-hour that evening. He was obviously suspicious that YZ could be mixing the marital with the political in terms of making the house fit for the arrival of the Madam of the house. It is a long time now memory wise but I don’t think YZ disappointed him because we saw Jega re-arranging one or two things himself. It was fun. The night turned out great as everyone was relaxed.

Of course, our set graduated and left BUK for different destinations in December 1995. Shortly afterwards, he too left the university system to engage with domesticating the information and communication technology revolution. That was a surprising decision that some people suspect must have been informed by one of two considerations. Either he could see far ahead after being a member of the ASUU Negotiation team in the mid 1990s that it would take Nigeria such a long time to get the idea of the university right or he foresaw the current global transition to informational capitalism. Or both. Today, working with many other actors and interests, he has transformed into the single most active force for the most organised and emancipatory spread of IT empowerment and the message of that transition in Nigeria. May God give him many more years to do more!

How Long Will This Disease in Benue State Remain Strange?