Intercontinental ballistic missile (ICBM) Hwasong-14 is pictured during its second test-fire in this undated picture provided by KCNA in Pyongyang on July 29, 2017. KCNA via Reuters Credit: Der Spiegel

Language and Conflict: Evidence from Verbal Warfare in US-North Korea and Nigeria’s Tensions

The US-North Korea face-off has taken over the global media space this weekend.  From Global Research to Prospect magazine to The New Yorker, The National Interest, Daily Maverick in South Africa, The Independent in the UK, The New York Times, The Washington Post, Der Spiegel as well as the online platforms of key Think tanks, there are numerous interesting materials to read. If the media headlines are taken as barometer of global security this weekend, it would be concluded that the world is on the edge of the cliff of nuclear blasts.

It is not too far from that because the language of nuclear warfare is a language of priority. But, the world also has formal and informal mechanisms by which it calms itself. That is the practice side of how language leads to conflict. It does lead to conflict but not in an automatic sense. The process includes the institutional dynamics within which that happens.

For instance, a horde of intellectuals of statecraft must be at work, trying to prevail in terms of the best options available, from the Generals and admirals at Pentagon to the eggheads connected to the American State Department to the Central Intelligence Agency, (CIA) and those generally called the defence intellectuals who constantly imagine the various ways nuclear war can be fought – limited war, Mutual Assured Destruction, (MAD), etc. Key members of the troubled ‘Liberal World Order’ would also be at work. It is easy to imagine Japan in the forefront on this because it runs the most risk of being hit again in the event of a nuclear war breaking out. Geographically close to North Korea but geopolitically aligned to the US, Japan is the most vulnerable in a face-off. Having been hit in the Second World War, it is assumed it will seek ways to ensure there is no nuclear blast at all between US and North Korea unless a single surgical strike can disarm and paralyse North Korea. No credible authority has mentioned this possibility so far.

Germany, France and the UK are other members of the ‘Liberal World Order’ that must be very busy talking to Trump or pressing the button here and there. Russia and China are not members of the ‘Liberal World Order’. The West calls those ones illiberal democracies but, this time, they will be at work because they are global powers and China, in particular, is an interested party. North Korea is just next door nieghbour and collapse of that regime in a disorderly manner could be fatal for China’s internal order. Who knows the value China attaches to an unpredictable but fellow communist regime next door? It is easy to imagine certain Think tanks such as Rand and the Council on Foreign Relations thinking through the entire things, being very well connected to the nerves of American power. Although it is not a great power, South Korea’s voice in the crisis would matter because it shares same identity with Japan: geographically and culturally in Asia but geopolitically with the US. It is also within the firing range of North Korean artillery should the young man in charge in North Korea feel sufficiently provoked.

Intervention is reproducing an article published earlier today by Der Spiegel which shows how Donald Trump contributed to current escalation by exceeding the unwritten protocol on nuclear capability. Kim Jung Un of North Korea no less did, both of them toying with nuclear weaponry that has, historically, been understood as weapon of deterrence, not for actually fighting wars.  Talk about leadership, language and conflict and you have got it in two unpopular leaders. 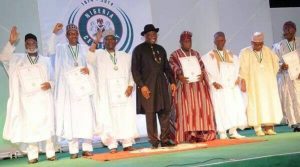 If there is any country where this language-conflict nexus is being replicated, it must be Nigeria. The only difference between US-North Korea and the situation in Nigeria is that one is about nuclear blasts while the other is about enemy images but both nuclear blasts and enemy image embody imponderable consequences in violence. So, in the end, they are not too far from each other.

From the US, the world encounters depiction of the North Korean leader as a communist dictator who is oppressing his own people. From North Korea, the world encounters depiction of the US as a Hegemon intent on its own brand of imperialism. In Nigeria, identity warriors parade a video or musical recording in Kano that signposts genocide while from somewhere in Ijaw land, a video shows an Ijaw leader angry that Diezani Allison-Madueke is called corrupt. Both enmesh Nigeria in a language game that invites violence, depending though on several other intervening variables but all of which could fail.

Rationalists would say each of these warriors is mad. The law and order or police approach would argue for their arrest just as Donald Trump would wish that a single nuclear blast could clear out Kim Jong Un. Discursive psychologists would disagree and insist on opening up the space so that both ‘mad men’ can establish the meaning of what they are blabbing about. The Discursive psychologist would justify his argument on the ground that there is no settled meaning of the language the warriors are using and unless they talk, there is no way such a meaning could evolve. Just as nuclear weapons have a different meaning for Donald Trump and Kim Jong Un, so also the issues in Nigeria’s deep divisions today. The Ijaw man in his video, for example, says “Nigeria is not for us”. By that, he meant Nigeria is for “them”. Whoever “them” refers to in his mind, by that binary reasoning, he has already created a we/them enemy divide. There are many ways to sort out a we/them divide but opening up the inter-subjective space remains the most recommended because of what its practitioners call “the empowering logic of dialogism”. It implies that the more ‘enemies’ talk, the better they break down the fears of each other.

Der Spiegel’s caption for this is: North Korean leader Kim Jong Un can boast that he has filfilled his family’s legacy of seeking to create a nuclear weapon.

If you don’t create avenue for talking and jaw-jawing, you end up with escalation. As things are, this is very likely how US-North Korea would end. There has to be a way of going back to the Roundtable because all the actors keep saying all the options would produce terrible consequences.

The problem in Nigeria might not be too far from the crisis of the absence of any one, single individual who is so neutral and carry so much moral authority as to serve the national purpose by reading the riot act to the country and calm it from the road to madness. In South Africa, even the whites respected Nelson Mandela and it is assumed that if Mandela were still alive, his appeal for calm to a movement of rage will restore sanity. With his ‘No Victor, No Vanquished’, General Gowon is closest to that in Nigeria. Nigeria’s complexity denies him that.

But does absence of a single individual also mean the absence of a national cohort? Obasanjo’s Ota Farm forum used to act that out by the nature of individuals in attendance. That was in the early 1990s. How is that not replicable in a different, national form that brings together an elite First Eleven? Back channels going might be helping to stem the current stasis but more than such approach is the open channel that speaks louder than voice to the generality of the people that the elite are talking and trying to solve the problem.

Rhetoric of violence could produce violence if care is not taken. As Trump and Kim Jung Un comes to appreciate that reality this weekend, so might the Nigerian elite need to.

India, Not United States of America, is Nigeria’s Model of Federalism – Emeka Anyaoku

Obasanjo @ 84 and the Case for Taking ‘Them’ Seriously