Mo Ibrahim, the chair of Mo Ibrahim Foundation and Donald Kaberuka, former President of the African Development Bank, speaking to the African angle at Chatham House

It’s a week of huge chunk of attention for Africa at Chatham House, the British think-tank on international affairs. Beginning today, May 10th, 2017, the Africa Programme of the think-tank’s think-tank is hosting one event or the other on one core issue or the other in Africa’s international development. That is routine for Chatham House but the series of brain picking sessions this time are not routine issues. Later today, for instance, Mevlut Cavusoglu, the Turkish Foreign Affairs Minister, will be outlining his country’s priorities for Africa. Many centres of power across the world would be all ears to whatever priorities the top Turkish diplomat will be presenting because Turkey, along with India, Brazil, South Korea, the Gulf states and Japan have been key to the convergence of interests of global powers in Africa in the post Cold War. 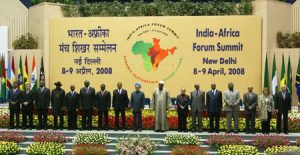 While some people have called that convergence 21st century scramble for Africa, others have argued it is the unraveling of globalisation. In 2014, the United States joined the ‘scramble’ via a US-Africa Leaders Summit. It was promptly interpreted as a catch up game with ‘China in Africa’. The US-Africa Leaders Summit has not been as institutionalised as the Chinese version which predated it but the tendency has remained a key feature of Africa’s participation in global politics as China, India, Japan, Brazil, South Korea, the Gulf states, Malaysia and Turkey each summon African leaders to one variant of summitry or the other at regular interval in recent years. What Turkey says at Chatham House, would thus give a glimpse of the limits and potentials of this diplomatic trajectory, with particular reference to what happens to Africa’s extractive industries. Chatham House schedule shows that the Turkish Foreign Minister would be discussing progress on commitments it made during the Second Turkey-Africa Partnership Summit in Malabo, Equatorial Guinea in 2014 as well as the subject of sustaining a mutually beneficial relationship with Africa in the future. Beyond being the foreign minister of a rising global power, Cavusoglu is an American educated scholar of International Relations and an ex-academic of the London School of Economics. So, in him, there is a marriage of the academic and practitioner of International Relations.

Africa has an opportunity to speak for itself and a platform to be heard loud and clear at Chatham House on May 11th, 2017 when Moussa Faki Mahamat, the new Chairperson of the African Union Commission, would outline his view of the way forward for Africa. His concepts, doctrines and policy frameworks or regimes would speak to the question of African agency in international politics today.

Nigeria has a share of the week to itself, reflecting its stature, actual and potential. May 17th and 19th, 2017 are devoted to launching of Chatham House report on “Collective Action on Corruption in Nigeria: A Social Norms Approach to Connecting Society and Institutions”. Many critics and observers of the on-going anti-corruption war in Nigeria are most likely to be on the watch out for the report in terms of what the norms approach offers differently from the current muscular regime of fighting corruption.

Nigeria is also mentioned along with South Sudan, Somalia and Yemen in terms of international responses to preventable catastrophes such as crises and famine. Stephen O’Brien, the United Nations Under-Secretary-General for Humanitarian Affairs and Emergency Relief Coordinator, will be handling this on May 12th, 2017. Somalia’s transition and maritime economy have a session each during the week too.

Chatham House has its time-honoured conventions and protocols about the use of the views it generates but, somehow, the discussions on these topics are the discourses by which Africa is constituted and reconstituted within the structural and institutional context of existing global power relations. Therein lies the importance of the week’s events, as always. The Nigeria Institute of International Affairs, (NIIA) used to be the theatre for this sort of reflective engagement with the world before its disappearance from the scene, especially after the departure of Prof. Bolaji Akinyemi as the Director-General on the eve of structural adjustment programme, (SAP). The South African Institute of International Affairs might be confronting its own crises but it still publishes its flagship journal, The South African Journal of International Affairs, (SAJIA)

How Long Will This Disease in Benue State Remain Strange?

Kole Shettima at 60: The Dwindling Tribe of Patriots and the Challenge of an Alternative Nigeria

For Kole Shettima and Amina Saliu on Their Special Anniversaries