Reflecting on the Prof Anthony Asiwaju Generational Paradox in Nigeria

The public presentation later today of Prof Anthony Asiwaju’s Bridging African Boundaries: Cross-Border Areas and Regional Integration in Comparative History and Policy Advocacy presents an apt occasion for reflecting on this paradox. The paradox in question will become clear as the reader goes into this piece. For now, let us begin from the beginning. 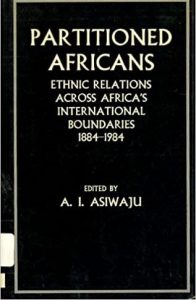 Marvelously delineating the borders of Border Studies much, much earlier than others

Today, Border Studies is one of the most fascinating spheres of knowledge in International Relations. Hijacked almost entirely by the poststructuralist lens and the organizing question of: where is the border?, the sphere always has something new to offer as specialists there struggle to outdo each other in demonstrating that the border is a derivative of power, not a physical space.

For them, power decides where a border is and hence there are more walls and fences and all manner of barriers today in a world that is supposed to be borderless. Capital can move any and everywhere but not labour. Labour confronts megamachinism at border posts, airports and seaports across the world. This has been so naturalized in passports, visa and all of that but it is all about power differential between capital and labour and the question of who can go to where. This is what the African poor seeking the land of milk and honey confront when they try to force their way into Europe.

It all makes Border Studies a marvelous sphere of inquiry. But even more marvelous is to think that, as early as 1971, a Nigerian student of History in a Nigerian university was already cracking his head and delineating the borders of Border Studies towards what it is today as described above. Yes, that is exactly what a Prof Anthony Asiwaju was doing at the University of Ibadan. His theoretical and methodological directions would certainly reflect the paradigm that was hegemonic then but he was doing nothing less than framing border and bordering as issues in geopolitical power relations. This is what we see in a title such as “Western Yorubaland under European Rule” that he pursued in that engagement and which Dr. Chris Kwaja, one of the reviewers of Prof Asiwaju’s publication being presented to the public today has told us “laid the foundation for his voyage in the field of border studies”.

Thereafter, one publication followed another since 1971, all of them native-sensitive, original but also globally competitive. Collectively, those publications leave Prof Asiwaju standing too tall to have been overtaken by any emergent scholar in Border Studies in Nigeria. And it presents a huge paradox.

Pacesetters are generally difficult to displace entirely. That may be so but it didn’t stop Kenneth Waltz from displacing Hans Morgenthau in the study of Realism in International Relations but then for Waltz himself to be sent packing, (well, something like that) by Richard Ashley or for John Mearsheimer to so re-shape Neorealism; for Nina Tannewald to enter that club from constructivism and for the much, much younger Patrick Thaddeus Jackson to unmake, (well, something like that) everyone else by reconfiguring Methodology. This is the case in US International Relations and which is generalisable, the US being the largest concentration of scholars and scholarship in International Relations.

Nigeria is not the United States but they are very comparable on this in the African context. As such, why the Nigerian case is the reverse remains a puzzle, the solution to which must be part of problems to be solved. This is because it must be a sign of disturbing decline for the pioneers to still be the referents. That can only suggest that the members of the generations following the pioneers are not paying their dues to society, whatever explains it! 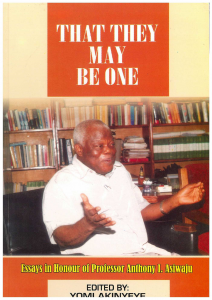 If it were just Prof Asiwaju who monopolized this tradition of breaking new grounds and setting the pace to a point that he cannot be displaced, it might have been more tolerable. But it is not. Rather, it is the entirety of his generation. Thus, in Literature, Achebe, Soyinka, Clark and the others in that club set the pace at a height that no one from the generations that followed theirs has overturned.

As in Literature, so also in History. The big names in the Ibadan School of History are still the referents in the discipline, with the exception of the key players from the Zaria School of History and its anti-imperialist historiography.

The story is not different in Economics, Political Science and Sociology. The Billy Dudleys, Peter Ekehs, Adiele Junaidus, Isawa Elaigwus, Okwudiba Nnoli, Claude Ake and Bolaji Akinyemis are still the names that symbolize Political Science. Adiele Junaidu argues that Eghosa Osaghae penetrated the club as far as Federalism scholarship is concerned. Without disputing that, it would be difficult to say that the Osaghae generation, (Ibeanu, Jega, Ibrahim, Sam Egwu) have displaced the older generation. Prof Attahiru Jega has got a name recognition but much of it has come from activism, (ASUU national leadership, Vice-Chancellorship and lately INEC head). The exception could be Adigun Agbaje who though not in the first generation did something striking by studying hegemony. Agbaje therefore got himself into the older generation to the extent that hegemony has been able to colonise Political Science in all its dimensions before and after the Cold War.

In Economics, this is also true. The Okigbos, Sam Alukos, Adetunji Aboyades, Allison Ayida, Eskor Toyo or Dotun Philips are still the leading lights. It is like Geography where Akin Mabogunje has not been overthrown. That is not to say that we know what everyone in the discipline has been studying and if they all failed to match Mabogunje’s stature. It is rather to say that when the discipline is mentioned, the name that still comes up is that name. In that sense, Economics shares same fate with Sociology where the Omafume Onoges and Onigu Otites remain the big names.

The listing can go on, beyond the social sciences to Veterinary Medicine, Pharmacy, Agriculture, Engineering and so on. It is unlikely that the key contention that the members of the first generation of scholars are still the pacesetters will be challenged. It is not only that they are still the pacesetters, it is also that when they write, there are too few younger ones who can review the stuff in a manner that adds value to the stuff

This is a classic paradox because the members of the pioneer generation should not still be the big names anymore in any of the disciplines. Some new and younger scholars should have come of their own by stretching what the pioneers did years ago. If we are not seeing new Soyinkas, new Achebes, new Billy Dudleys, new Bala Usmans and younger Elaigwus, enjoying stature that dwarfs these names, then that’s a paradox.

And it would, naturally, raise the question of how this might be explained and overcome. The society itself and, by implication, the university system was better organised then? How could this happen to a country that ought to carry the African weight, having perceptively defined its foreign policy to have a centerpiece in Africa. And how can there be a turn-around that reverses the situation? It bears repeating that Nigeria is going nowhere if it does not overcome the reality of diseased universities as they exist without exception now in Nigeria.

But, while we queue behind the Academic Staff Union of Universities, (ASUU) in terms of where to begin the reversal of fortunes, it would not be sycophantic at all to agree with those who call Prof Anthony Asiwaju the doyen of Border Studies in Nigeria. Nobody can thank him enough because no one can, as yet, quantify his contributions, given the constitutive force of texts. If meaning is always delayed/differed, then the totality of what he wrote might just begin to be meaningful, beyond his imagination, what with the coming return of Edward Said’s imaginative geographies in Border geopolitics. And this is same for all other members of his generation, be they in Literature, History, Political Science, Economics, Geography and what have you!