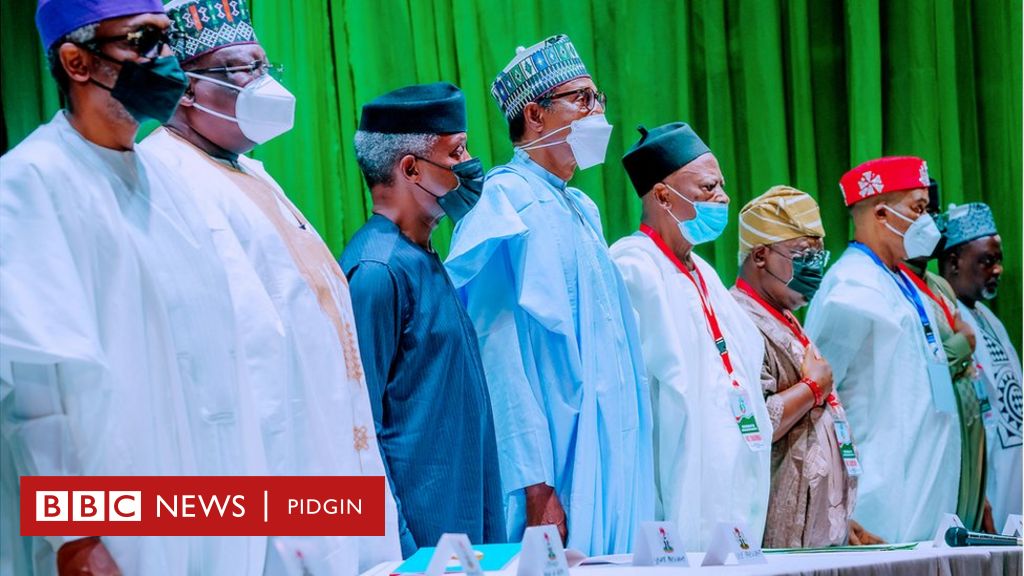 Nigeria’s ruling party ended Sunday, June 5th, 2022 a more bouncing ruling party than the image it cut in the past few days. Notwithstanding the horrific attack on a Church in Owo in Southwestern Nigeria by unknown gunmen, the All Progressives Congress, (APC) appeared to have overcome the criticisms that columnists in particular heaped on President Buhari for asserting his entitlement to anoint someone and the problem of choosing a presidential flag bearer that the party had obviously been having. Putting up a brave face, the president even went on to declare how the party is heading on to a third straight win to rule.

Perhaps, the APC leader could afford to put up that face once after the party had cleared one of its major hurdles – zoning the Presidency to the South after eight years of the North. Unlike the People’s Democratic Party, (PDP) which took it to the North since Dr. Goodluck Jonathan, the last holder came from the South, the APC ought to take it to the South after eight years of the North. Otherwise, it would give proof of the deeply felt discomfort among Nigeria’s Southerners about a North assumed to be permanently plotting exclusion of the South from political leadership of the country. But then who emerges from the South that would enable the APC win the third time consecutively – 2015, 2019 and 2023?

A lot have been written in response to this question. A lot will continue to be written especially in the social media till someone emerges at last. The difference in that satisfying game of speculating who emerges as the APC candidate in the 2023 will be the strength of the reasons adduced by each space of writing. 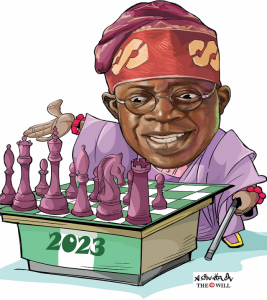 An artistic impression of Asiwaju by TheWill

Asiwaju Bola Ahmed Tinubu has cornered much of the attention. Of course, he is the elephant in the room just like Atiku Abubakar is in the case of the PDP. However, unlike Atiku, Asiwaju is unlikely to be the winner. This has nothing to do with whether he is a good or bad candidate but a conclusion drawn from the balance of forces in the APC.

There are a lot going for him just as there are so much aligned against him, not the least his outbursts last Thursday during which he credited himself with making the Buhari presidency. It is not a statement for which a party mandarin will be punished ordinarily especially after apologizing and withdrawing parts of it. But there are other factors on the ground which the statement will be situated in to try to ensure the defeat of the party leader.

Democracy in Nigeria floats on Nigeria’s endless obsession with the good candidate. It doesn’t matter to the country that privileging the good candidate even when the concept of good is, like the concept of beauty, in the eye of the beholder is, inherently, problematic in a multi-everything country such as Nigeria. So, Nigeria can easily and quickly tag anyone as good or bad in a largely morally and static sense of that word. This confused moral infatuation with the category of the good candidate means that someone such as Asiwaju can easily become a fall guy in the midst of hierarchically minded and puritanical disciplinarians. It will be interesting to see Asiwaju escape this at the end of the day, in spite of war chest, network.

Intevention’s verdict is that Asiwaju would lose the APC ticket. Of course, magic could happen and the dynamics could favour him, it is very unlikely in the context of the obsession mentioned above. 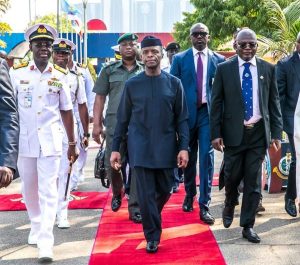 Would Prof Osinbajo’s ADC have changed from a Police officer to a military officer after May 2023?

He would have solved the problems of a very well educated, well spoken, experienced technocrat and a groomed heir for the APC but if these were considered, no one should have been in doubt by now that a successor has been anointed. That has not been the case, meaning that if he were to win, it would all be on the strength of his own footworks, money, network and luck rather than the favoured child. Do all these factors favour him? So far, they do not appear to although no outsider can be so sure of how the dynamics shifted and in which direction in the past few days.

What that means is that, like his former boss, the Asiwaju, he could miraculously win and emerge the candidate, that outcome is very unlikely. The dynamics can be very fluid but the dynamics can also be very resistant as far as opening the gate of power is concerned. Prof Osinbajo is a mandarin himself and it could be said it is not over until it is over.

Ordinarily, the governor of Ekiti would not have been qualified to be mentioned. What have happened in the past few days have changed that. He has a core that can assert itself within the APC establishment and win. That core is certain to do that because it cannot contemplate life under the presidency of its opponent. Since they have ample resources, relative influence in the party as well as on the president, they can go far. That is one aspect of the Fayemi probability.

The second aspect resides in Fayemi in himself. He is the type of aspirant that, pushed to where it is today, the party is bound to want to pose with. One reason for this would be the quality of newness that youth and education gives his candidacy against a much older Atiku Abubakar that the APC has to defeat to have a third straight win. A second reason would be that he has a constituency outside the party. The masquerades upon whom the radical activists depend for agenda or as models would most unlikely leave what they are doing because a Kayode Fayemi has come to town but he would still draw a huge chunk from that constituency.

He was a NADECO ideologue but, thereafter, he has not been threatening ethno-religious fire and brimstone and would most likely be considered a safer bet than those who can claim a pedigree which if not reckoned with will react or threaten the edifice. He has also not been articulating options for a beleaguered nation corresponding to his education but that is perhaps out of the realization that Nigeria does not very much applaud the intellectually self-assured individual. So, he might have deliberately chosen to appear less than he knows. It would be too reckless to pronounce him closest to the throne in the APC but that looks like the reality emerging. There is no way a party which sees its opponent as the embodiment of corruption will not most likely push forward one of its aspirants whom they can present as Mr. Clean, a PhD holder in War Studies whom they can mediate as the answer to the generalized insecurity enveloping the country.

These are all speculations from the distance. It would be interesting to see the results of the APC presidential primary some few hours from now. It is a matter for regret that it would, unfortunately, not include the aspirant who would have been the smoothest: Dr. Ogbonnaya Onu. At 71, he is not extremely old. He would have been coming in as one of the most educated, being a Stanford University graduate and a holder of a First Class from a Nigerian university when they were all world class institutions. Quiet, humble and with a major sacrifice for national unity as stepping down for all aspirants of Yoruba identity in 1998/9, he is eminently qualified to rule Nigeria.

Unfortunately, the view is that the Igbos have not managed the post Civil War re-integration well. According to those who pose the issue that way, the Igbos get angry and keeps sending contradictory messages to Nigeria: they would want one of theirs to rule Nigeria but are also buying into the strategy of gaining power through an insurgency. Analysts concede that the Yorubas also used an ethnic insurrection to get power in 1999 but argue that Yorubas have never levied war against Nigeria and their use of an insurgency does not carry the same weight as that of Igbos.

The feeling that Igbos do not appreciate what Nigeria did in making the late Dr. Alex Ekwueme the Vice-President under a decade of the war comes out in this argument, particularly the invitation to the same Dr. Ekwueme to lead the G-34 which metamorphosed into the PDP of today. Dr. Ekwueme would have been the pioneer PDP presidential candidate if the club of retired Generals were not so insistent that the cap fitted Chief Obasanjo, one of theirs, more than anyone else in the aftermath of the June 12 crisis.

It would not be out of place to say that Nigeria earnestly yearn for a Nigerian president of Igbo origin, especially one with Dr. Ogbonnaya Onu’s pedigree!