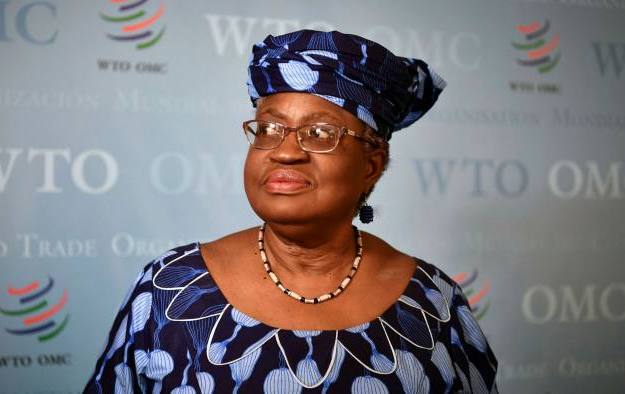 Posted By: adminon: February 28, 2021In: LifeworldTags: No CommentsViews:
Print Email

Ambassadors and heads of international organisations numbering 124 in Geneva are protesting what they see as stereotyping the impending Director-General of the World Trade Organisation, (WTO) Dr. Ngozi Okonjo-Iweala. They have subsequently sent a letter to editors of the newspapers which had introduced the new WTO chief by the title “This grandmother will head the WTO”, closing the letter with the point that some of the signatories are grandmothers.

No full list of the signatories is available to Intervention nor is the complete list of the newspapers involved. It seems the list has not been published, that being what many of the people who commented on the development on Twitter and other platforms are also asking for.

What the newspapers have done or seem to have started is subject positioning Dr. Iweala as a grandmother. It is politics because a grandmother suggests an expired or a highly exhausted woman who has very little that is new to add to what exists. By so doing, it would be easier to say at the end of Iweala’s tenure that she merely came to sit out an African quota. It is the politics of the power of words in international politics.

Informed sources told Intervention that the problem may be not just misogyny. Rather, it is that Okonjo-Iweala is only a year and half older than Christine Lagarde, former Managing Director of the IMF, now President of the European Central Bank. Lagarde was a grandmother when she was appointed President of the ECB in 2019. However, nobody recalls any newspaper highlighting her status as a grandmother in announcing her appointment.

It suggests that Dr. Iweala would most likely be a subject of controversy throughout her tenure. While racists would most likely be on her, multi-culturalists, gender warriors and Africanists are likely to remain with her, fighting back most of the time. Radical critics from even her home country are not likely to be with her throughout, believing that, as an IMF/World Bank oriented technocrat, she lacks patriotism to be supported. It would be interesting to see what her traditional headgear signature outfit would do in her favour.

Within these clashing views of her from many quarters, her tenure promises to be an interesting, most likely controversial one. The letter appears below 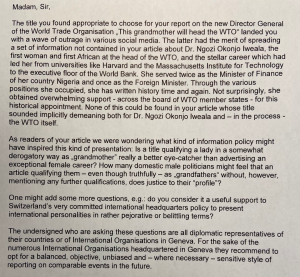 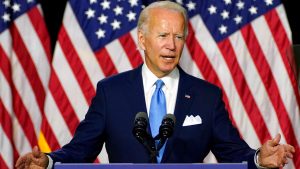