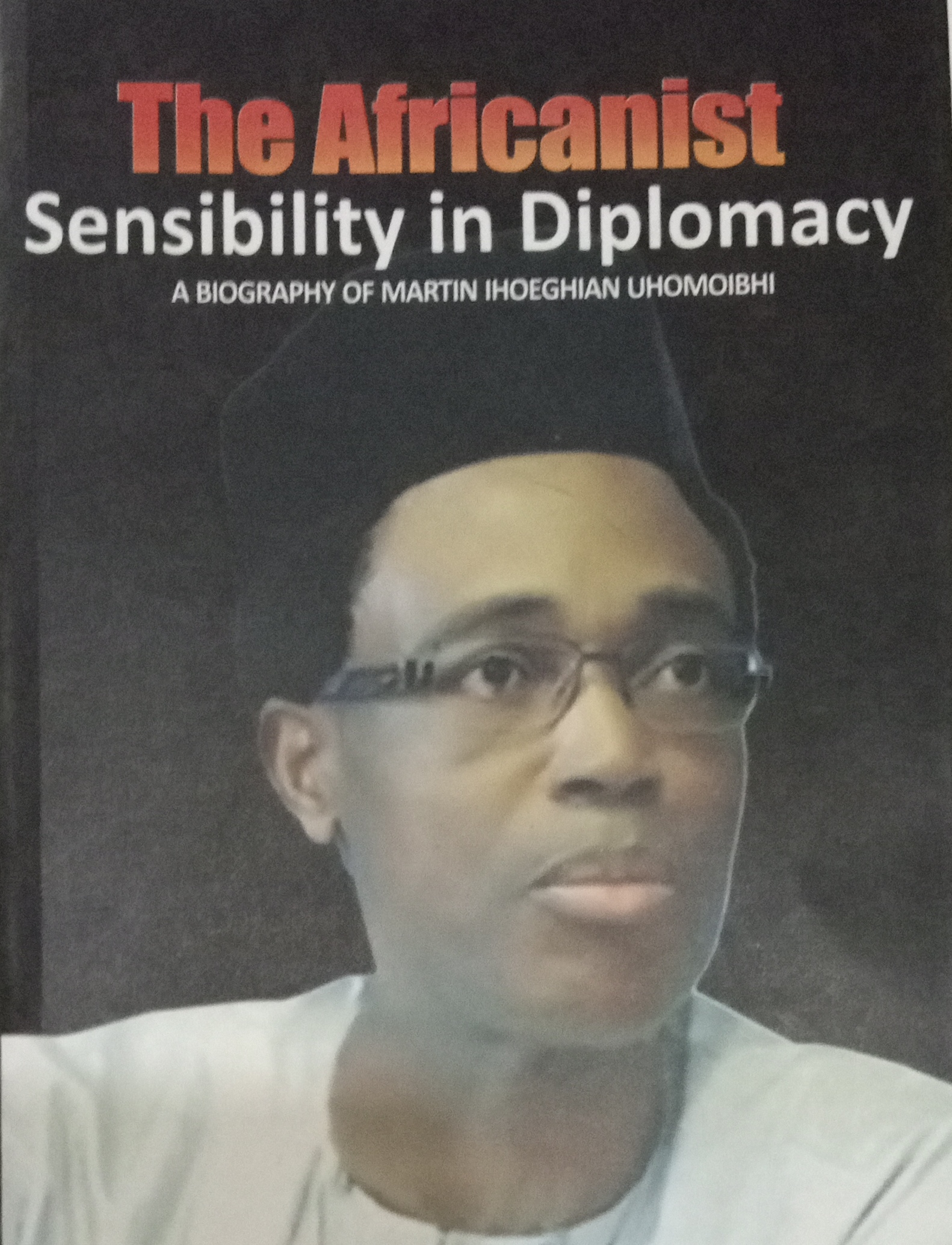 The Story Behind the Story of One Nigerian Diplomatic Career

This book presents a problem for any reviewer: focus on the subject matter of the book or first draw out the equally compelling features that gives the book its multidimensional character? Or, do both but in sequence so that the review does not become another book in terms of length? The third option is chosen, not only because there is no alternative to doing both but also as a nice way of savouring this pudding from outside to its centre.

Officially, the book is authored by Emmanuel Emasealu, a Professor of Theatre Arts at the University of Portharcourt  and Ezechi Onyerionwu, another academic and, in fact, a literary critic, playwright and biographer at the Abia State Polytechnic. But, on the blurb of the book, the reader finds three additional ‘authors’. They are authors in the sense that their stature is such that even one sentence on the topic makes them accomplices of this narrative.

The university which gave birth to the University of Ibadan

Let us start with Emeritus Professor, Joe Alagoa, one of the names associated with the successful protest against rationalist account of History that constitutes the Ibadan School of History of blessed memory. Alagoa who wrote the Proword to the book seems to suggest that the University of Ibadan took a position against even its mother university – the University of London – not to award First Class to any of its student(s), certainly the ones in History. Alagoa’s sentence under reference in the very short Proword is this, “It was a self-confident body of teachers and students, willing to set their own agenda of excellence, against the sciences, medicine, etc, and against the old institutions of Europe, even against the moderating University of London examiners. Thus it was in the matter of awarding First Class Degrees in History. The subject of this biography was not the first to be denied the First Class he deserved and expected. Quite a few of us accepted the Second Class Upper Division as a challenge to perform at the First Class level we knew ourselves capable of, in the field of action in our life vocations. We thank God the subject of this biography did just that in the diplomatic arena.”

It is a long but warranted quote. Dr. Jonathan Zwingina, chief strategist of Hope 93 was also denied First Class at Ibadan but in Political Science. In his own case, the matter was not explained the way Alagoa has done in the case of Dr. Martin Uhomoibhi above. Rather, in response to the insinuation gaining ground that Zwingina was not given First Class because he came from the North, the late Professor Billy Dudley intervened to say that Zwingina was not denied First Class because of anything that had to do with coming from the North. Rather, First Class, he said, is not given for high marks but for intellectual completeness. And that the University of Ibadan at the time did not have what it would have taken for Zwingina or any other student to have attained that completeness as have been awarded a First Class Degree. These were listed as the number and quality of professors on the ground, the update-ness of the library, the ratio of students to academics, etc. In other words, these features were not considered adequate to ground a First Class because a First Class Degree is a universal category. That is, First Class in Ibadan must be First Class any other place in the world, meaning that the student has so powerfully brought all the angles to the questions that no assessor anywhere can find any such angles missing. How can a student do that in a university that didn’t have a library that enabled him or her to bring all the angles by reading the latest journals?

A million questions can be raised from Alagoa’s testimony but only two questions will be posed here in The first would be why the mandarins of History in Ibadan at the time would feel comfortable with challenging the Enlightenment view of Historiography handed down to them but found nothing hegemonic or intellectually imperialistic in the idea of journals published elsewhere being the source of knowledge for satisfying the completeness required to obtain a First Class Degree? The second question would be this: How come the University of Ibadan of those days would be that self-conscious enough to decide against awarding First Class Degree in the Humanities on the ground of lack of completeness but not the universities of today comfortably awarding hundreds of First Class category even when Nigeria itself is almost gone?

Even as we continue pondering on Alagoa, we move to the Foreword written by another member of the History enclave in those glorious days of the University of Ibadan. That is Professor Obaro Ikime. As the Head of Department who employed the subject at Ibadan, he is worth listening to. As laced with the religious lens as his piece, he did convey the point that Dr Uhomoibhi was the student to watch from Day One. He gives the example on page XIV how two of those he taught as a Corper in the NYSC have since emerged governors of Kebbi, citing that as a case of Dr Uhomoibhi’s first opportunity to put into practice what Ibadan History taught him – the idea of “we are all Nigerians, Africans, we belong together, irrespective of our ethnic origins”.  And, listen to this from Prof Ikime: The University of Ibadan was, as of 1973, the toast of the nation. She had established herself as a world class university, and the Department of History at Ibadan had established itself as the centre for the re-interpretation of African History by Africans”. 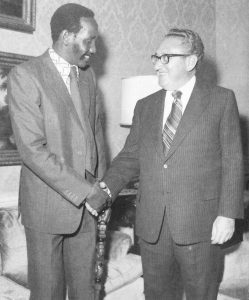 Joe Garba’s picture Murtala Mohammed liked because Garba was not only taller than Kissinger but was also carrying a swagger stick, overwhelming Kissinger all round!

Next is Prof Bolaji Akinyemi who must be the most known of the ‘authors’. But before we take Akinyemi, there are Prof Joy Ogwu, former Director-General of the now limping Nigeria Institute of International Affairs, (NIIA) as well as Permanent Representative of Nigeria to the United Nations; Odein Ajumogobia, a former Minister of Foreign Affairs of Nigeria and Prof. John Horace Enemugwem, the Dean of the Faculty of Humanities at the University of Portharcourt as at 2016 when the book was first published. Unless they allow ‘Third Term’ in that university, he would most likely no longer be on that seat. All three are comfortable with the rating of Dr. Martin Uhomoibhi as an outstanding diplomat which Prof Alagoa started in the Proword and which Ikime endorsed. Their interventions are considered important in that, except Prof. Enemugwem, they were each Dr. Uhomoibhi’s boss at one point in time or the other, saw him at work and may not just be saying nice things about him only in conformity with the diplomatic etiquette thereto. Above all, Prof Ogwu went to foreign policy and diplomacy from academia.

Prof Bolaji Akinyemi’s is basically a continuation of the testimonial for Dr Uhomoibhi but by someone who, in spite of his conservative preferences,, is admirably referential as far as the African protest in global politics is concerned. No one does it better than Akinyemi and those who may not accept this for reasons of ideological animus against him, may only need to look back at a number of his arguments and practices in diplomacy.

Akinyemi’s sense of Dr. Uhomoibhi as “unarguably one of the most talented and resourceful” is a significant contention because he can be understood as basically saying that the subject of the book is merits the title of the book. Without underestimating Dr. Uhomoibhi in any way, one would have thought that the subject of “the Africanist sensibility in Diplomacy” applies more to a Mandela, an Obasanjo for his uncommon bumptiousness on the world stage or his love of that and, lastly, the late Joe Garba for such a remarkable transition from ‘diplomatic soldiering’ to a real intellectual of world politics by the time of his death. But it is Dr. Uhomoibhi that luck and the creativity of the authors of his biography has invested with the stuff to the acceptance of all the giants so far mentioned. How then wouldn’t this book be interesting when with its promise of the full details of how not only a History graduate of the University of Ibadan in those days but also a PhD holder from Oxford would, however, give up the company of his big name teachers – Kenneth Dike, Jacob Ade Ajayi, Takena Tamuno, Adiele Afigbo, Emmanuel Ayandele, Bolanle Awe, etc – in favour of a career in Nigeria’s Ministry of Foreign Affairs from the early 1980s to 2014.

If this short cycling around the book gets everyone to look for the book and read it, then there would be no need for the part two of it anymore. It is, indeed, a book full of graceful expressions, powerful phrases and revealing insights. People who are saddened by empirical details of Nigeria’s gradual but steady crash from Olympian standards since Independence will be sadder reading the book, especially if they started their reading from pages 99 – 100, come back to pages 97 – 98 and then go to start properly from page 1.

But, nothing should becloud any reader from centralising the substance of the book. The 21st century is unfolding in a manner that makes the title of the book an even more significant one in global politics. Populist leaders and national chauvinists have already lost the argument and nothing will push back the march of cosmopolitanism and multiculturalism but just as none of these will make the case for eliminating the ‘African condition’ a non-issue.  Although Ali Mazrui’s “On the Concept ‘We are All Africans” must remind us of the imperative for conceptual fine tuning of ‘the Africanist sensibility’ in a world being rapidly circumscribed by multicultural practices, the ‘Africanist sensibility is very much at home with everything progressive.

Finally, finally, is it not very interesting that Dr. Uhomoibhi is back into his romance with History but, this time, not with Ibadan School of History. Rather, it is with Veritas University, Abuja. Who knows if a ‘Veritas School of History’ may not be brewing should that university work so hard to find a few more of the Historians trained in Ibadan and Zaria in those days? The unwritten law in that university against destructive sycophancy is still on but it would be such a great achievement no one can deny the present headship of the university if some impending movements into its Department of Political Science come to pass. What will stop such a a university from flying?

CISLAC Slams Advocates of Sanctions on Nigeria Over #EndSARS Protest