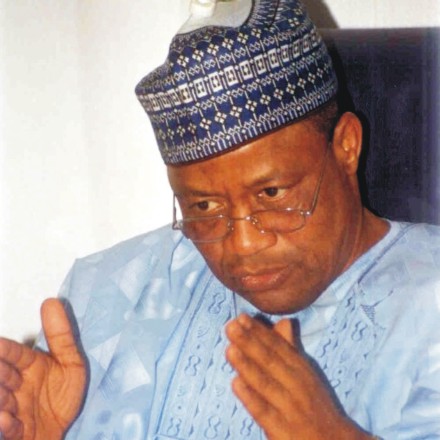 The month of August brings back memories of the well known Nigerian soldier turned politician – Ibrahim Badamasi Babangida. IBB, as Babangida is more known, was born in August and he organised a coup on an August date. So, August always brings about memories of his adventures in power, especially his August 1985 coup.
Perhaps, History is too complex to handle. In the decade of the 1990s, IBB was the ultimate devil incarnate in public opinion. Today, it is doubtful if there is a competitor for that title in public opinion than the president. Perhaps, it is in the nature of the office to bring unpopularity to the occupant. It is not necessarily that IBB has been absolved of everything that defines his ‘evil genius’ identity. It is that time and mood have shifted. His coup and military politics is no longer the issue. What is at issue now is how history has turned more generous to him than ever expected.

The IBB moment this must be! It is a picture from which an image reader can produce a huge book about the military in Nigerian politics from December 1983 to May 1999

That gap toothed one claimed to so love Nigeria that he could not bear what he regarded as Buhari’s disregard for intricate balancing in a country that survives only on that. Those are his words oh, not ours. So, he pushed the lean one with his WAI koboko out of Dodan Barracks and the nation cheered. That was 35 years ago. A picture of what may be called the IBB Moment has been circulating in the social media, a good throw back to those days of a peculiar game of thrones. He came off good, to the last you would say, in the balancing game; in incorporating intellectuals and technocrats in the service of personalised power but only to lose his constituency. So, he stepped aside, a phrase nobody has successfully been able to decode and which he alone who knew what he had in mind has dodged all journalists who have interviewed him. In truth, he meant that he was leaving the seat of power and relocating to the Hilltop to oversee the politics of power from that staging post.
It is a task he has been very successful at. With the possible exception of Buhari, he has been deciding who became president. It is nearly impossible for any single individual or interest to decide power in contemporary Nigeria but IBB has been part and parcel of the networks and camps that decided that. Obasanjo decided Yar’Adua as successor but who provided the local engine room in enacting Obasanjo’s return to power? IBB was among the designers who put up Obasanjo as a contrast of the bad soldier. Remember, in 1998-1999, one of the slogans was: there are good soldiers and there are bad soldiers.
Although Obasanjo was later to declare bringing him into power as a case of bad investment for IBB and the other share holders and, sometimes, they have had to slug it out on the pages of newspapers, any conflict manager who imagines that the members of Nigeria’s Super-5 are really going to club each other to death had better look for something more serious to do.
Basically presiding over Nigeria but from the Hilltop and, therefore, without direct blame for the disasters in governance, IBB has been a good story in how to be a permanent winner. Time and his own capacity for deft manoeuvres have helped him recover much of the IBB mystique. His circle is intact, both at the level of the Super-5 as well as the big boys in the military who constituted the IBB power crew. They might be going for each other’s throats behind firmly locked doors but, unlike the Abacha Boys who were singing at Oputa Panel and writing books on their experience of intrigues within, nobody hears much of internal squabbles outside of them. Apart from Major Debo Bashorun who squealed, none else did or can be immediately remembered to have done so. Before the section of the big boys who plotted a coup against him in 1990 could say IBB, he said he had forgiven them, a disarming, disciplinary move. That is, disciplinary in the Foucauldian sense. IBB has not come back to power but this is not because he was stopped by the Nigerian people but by the dynamics internal to the Super-5.
In other words, aside from ‘losing his investment in OBJ’ and being unable (or was it unwilling?) to block Buhari in 2015, he has lost almost nothing. The traffic to the Hilltop might have thinned down but who else but him would have been the subject of undergraduate and postgraduate courses in Structure-Agency debate in the social sciences across Nigerian universities if not for his extremely calculated manner of doing things had not blocked him from putting some puzzles on the table from his adventure in power. In the absence of that, it is only his successors who have been doing the public relations for him.
The first has been OBJ who though has quite a strong understanding of the ideological impulse driving neoliberalism, went ahead with it. It is beyond debate that neoliberalism, as Prof Sam Aluko predicted, robbed Obasanjo the lifetime opportunity to have made history in a manner that is beyond contestation. Today, he has to be defending his tenure, something that he is not supposed to be doing if he got it right. By continuing with a policy that he had said lacked human face, he was being the greatest public relations for IBB because that is the same as saying that, basically, there is no difference between him and the self-proclaimed evil genius. Or that SAP or whatever name it is now called is something none of them in that class can resist, unlike their counterparts in Latin America. 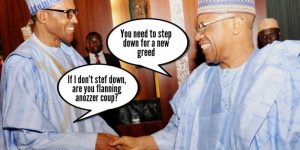 But Obasanjo is nothing compared to Buhari in serving as IBB’s biggest public relations manager. Number one, Buhari has given credence to IBB’s narrative of him as lacking in sensitivity to the imperative of intricate balancing game. The cry of nepotism renting the air today is all traceable to interpretation of lopsidedness as a signifying or meaning practice rather than something innocent. Since there is no truth beyond what people perceive to be the truth, Buhari has simply acted in a manner that proves his denial of IBB’s charge a mere discursive move. There can be no justification for observable lopsided appointment in a multi-everything society in a society at Nigeria’s current level of appraisal of social dynamics. Nigeria is not Cuba where mass mobilisation has taken the citizenry to a level of appraisal where Castro’s brother succeeding him was not an issue. The president might have gotten away with it without much ado but that is not possible again with the generalised insecurity. If citizens become vulnerable to innumerable threats on the scale Nigerians have been since December 2016 and the president can neither stop it nor forge a national consensus on how to deal with it, then he is bound to be guilty of complicity as charged.
It is not clear which of insecurity or corruption is where President Buhari becomes the ultimate public relations actor for IBB. Buhari’s argument is that he was overthrown because he wasn’t going to allow people who wanted to be allowed to do as they pleased with the national treasury. He was aiming at IBB and company whenever he said so. Nobody has heard him saying anything of that nature since the NDDC and related soap opera which entertained Nigerians no end. In fact, disclosures on corruption right under the president’s nose have certainly reached a desensitizing proportion for Nigerians. In other words, it can be claimed that people hear of corruption now to a point where they no longer react to it. And the question people are asking is: Could it be that it is not corruption the president hated but some people being corrupt? This question or the likes can be heard very frequently now.
And Buhari is implementing SAP which they no longer call that name these days. Buhari has presided over persistent rise in energy prize for the past five years plus. Nobody says and nobody can say that President Buhari is responsible for everything that is wrong with Nigeria. And it is not as if he is not being fought. The volume of misinformation going on is evidence he is being fought. But what the folks are saying is that he invited it on himself. He did so in the context of the magnitude of doubt about the Nigerian project that has arisen directly from actions and inactions of the president today. They are such that unless he manages to operationalise a joker at some point, he would be leaving office totally diminished locally in the North, nationally in Nigeria and globally. This can hardly be otherwise even by merely looking at a list of achievements The Presidency released a week or so ago. Critical observers are saying that, merely looking at the list of mainly infrastructural projects, it could easily be concluded that the president has a poverty of philosophy of power crisis. Infrastructure in themselves do not tell a story.
History is never written once and for all. But all the evidence are pointing at the conclusion that there are basically no differences between these soldier-rulers at the class cum ideological level. There is a class mission that ties all of them together in how they exercise power. But there are also substantial differences in approach and style between, in this case, Obasanjo, IBB and Buhari. Those differences at the level of approach and style would appear to have transferred IBB-Buhari feud to History, with particular reference to this poser: how would Buhari not end up with the rating of a super public relations manager for IBB with just three years left, two of which would be his lame duck years and, therefore, very little chance of remaking himself away from the image of a chauvinist and a supervisor of corruption rather than an authentic critique of IBB?
How would IBB’s name sound today if any of post-IBB leader, especially Buhari who has been at logger head with IBB, taken a radically different road? History must, indeed, be in bed with IBB!