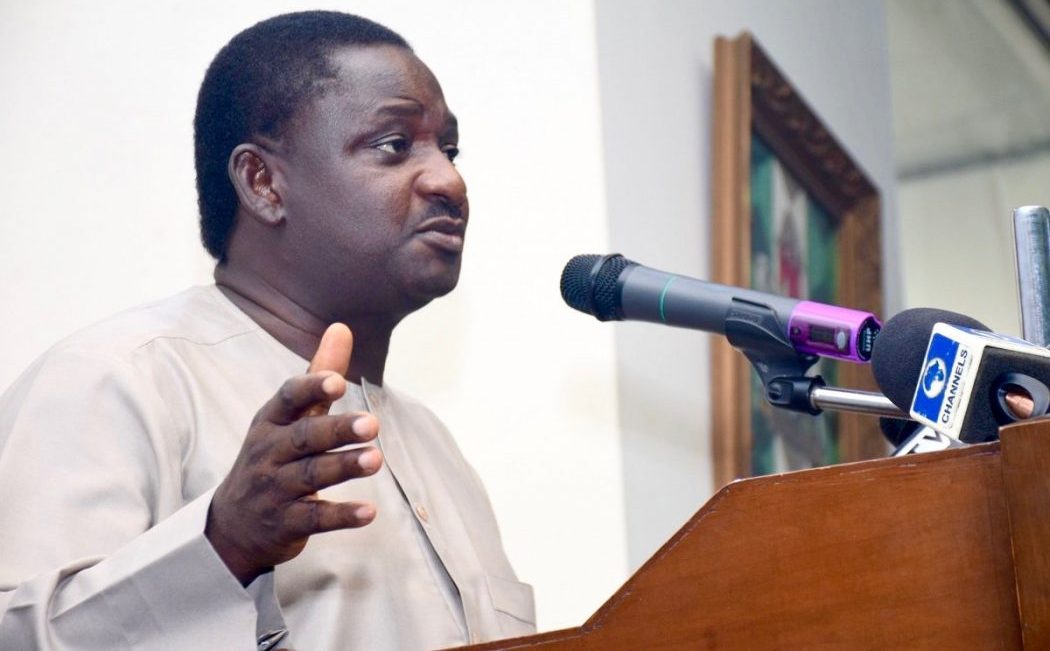 Mr. Femi Adesina, Please off your Mic, We Cannot ‘Calm Down’

The author, a postgraduate student in the Department of Political Sciences @ the University of Pretoria in South Africa tackles presidential spokesperson, Femi Adesina, to task in this piece

This is certainly an era of tragicomedy in Nigeria. In the midst of poverty (in absolute terms), occasioned by irresponsible leadership at all levels of government, elected and appointed lootocrats have been entertaining Nigerians for the wrong reasons. The first prefatory statement says it all! Since then, the “mic” has been silenced in spite of the empty threats from the leadership of the House of Representatives, and I can assure you it will never come on again. The pandora’s box has long been closed.

The second prefatory statement is one that most Nigerian’s are familiar with. For those who are not, it an excerpt from a short video clip that went viral on social media, containing a rather hilarious episode of a boy who was about to be punished for disobeying his mum. While it is still not clear what the boy’s misdemeanor was, his psychological plea for mummy to temper justice with mercy was both hilarious and touching. Even if the boy is a handful, such display of sobriety is sufficient for a loving mother to spare the rod.

That episode has been interpreted differently. Even though it had no bearing, whatsoever, on politics and governance, it is interesting to see how “calm down” has become an effective catchphrase in making a political statement by our leaders. Two instances are worth noting here. Bearing in mind the ravaging effect of the novel COVID-19 pandemic which coincided with the Eid-El-Kabir celebration, the Governor of Lagos State, Babajide Sanwo-Olu admonished Lagosians to “‘calm down’ and not get carried away”, as “we are in the middle of a pandemic….”

Similarly, in a bid to project the “achievements” of a government whose popularity is by far the worst since Nigeria’s democratic rebirth in 1999, the Special Adviser to President Muhammadu Buhari on Media and Publicity, Mr. Femi Adesina, equally resorted to the “calm down” narrative in his weekly column. According to him, we (Nigerians) will only see General Muhammadu Buhari’s (GMB) achievements if we “calm down”. Put differently, our unnecessary and unfounded bellyaching will not allow us to see the eldorado GMB promised us.  Well, the rhetorical question to ask is: are achievements averse to bellyaches that they would magically disappear when Nigerians demand for a responsible government that delivers public goods in the face of despondency and misery? To be sure that these bellyaches are not unnecessary and unfounded, a brief examination of our lived reality in Nigeria with respect to state-society relations would be more than necessary. This should confirm if Nigerians have any reason to calm down.

In the build-up to the 2015 general elections, then-candidate Buhari anchored his campaign on three pillars, namely, economy, insecurity, and corruption, which many (this author inclusive) considered to be the failings of the Goodluck Jonathan People’s Democratic Party (PDP) led government he (Buhari) sought to replace. This was the basis on which the contract of government he entered into with the Nigerian people was signed at the polls. In my opinion, between 2015 and 2020, this contract has been kept more in breach than in observance. In the area of security, it is safe to conclude Nigeria is at war with itself. The Haramists, kidnappers, bandits, and robbers are having a filled day while the government keeps defeating the former “technically”.

In Southern Kaduna, North-West, and North-Central, innocent Nigerians frequently walk into an early grave in a brutal manner befitting for animals, and the government does nothing aside from the usual saber-rattling that Nigerians are now tired of. Only a misanthropist that is the mouthpiece of a government that is equally headed by misanthropists will prioritise luxuriating in recounting the achievements of an irresponsible government in the face of this carnage. Worse still, when the citizens attempt to exercise their democratic rights in protest against these ills, the government violently uses security agents on them in a Gestapo like manner; but the same government is rarely seen using that same approach in dealing with the Haramists, kidnappers, bandits, and robbers. What a shame! Obviously, those who perpetrate these crimes resort to it because of the poor state of the economy that offers no employment opportunity for the teeming unemployable youths to earn an honest Naira.

To say the Nigerian economy has been ruined by this government is to put it rather mildly. Apart from the ailing state of the economy, the country’s public debt is at an all-time high since 1999. Between November 2019 and March 2020, Nigeria’s public debt rose from #25.7 trillion to #28.63 trillion; and the Federal Government (FG) is responsible for more than 80% of that amount (the rest was incurred by the State Governments). Although the GMB’s government inherited part of this debt, what this huge leap tells us most clearly is that much of the debt was incurred by his government, which it is still borrowing. Since accountability is not the forte of this government, Nigerians do not know why the debts were incurred and for what purpose. The truth is if recovered loots (in hard currencies) have been judiciously utilised, why then is the government borrowing the future of our unborn children? That brings me to the issue of combating corruption.

While the GMB makes a lot of noise about his government’s zero-tolerance on corruption, the reality is that it is the other way round. Corruption has zero-tolerance on his government’s hypocrisy concerning it, and the evidence is there for us to see as captured in the episode of the first prefatory statement. An inquest into the financial records of the Federal Inland Revenue Service, Nigerian National Petroleum Corporation, Nigerian Ports Authority, Nigerian Maritime and Safety Agency, Corporate Affairs Commission, Nigerian Communications Commission, security agencies, etc. would not be an epiphany but a confirmation of the extent to which these elected and appointed lootocrats have looted our commonwealth with reckless abandon. Sadly, the same presidency that has zero-tolerance on corruption hides under the cover of plausible deniability on some issues of corruption, even when the evidence is weighty, especially the ones involving its allies.

So, by resorting to some weekly hagiographies wherein Mr. Adesina asks Nigerians to calm down in the midst of despondency occasioned by a rudderless, kleptocratic, and irresponsible government, is in sum, the worst insult in the history of insults. Mr. Femi Adesina, please off your mic; we can’t calm down. The government you have been defending for the past five years has woefully failed Nigerians. As a result, I have long concluded that Mario Cuomo’s dictum which states that politicians “campaign in poetry; and govern in prose” is amply expressed under the GMB presidency.

The author is reachable via martinihembe@gmail.com.

As Ola Rotimi Lives On