Storylines
Home Spectacle 2023: Another Perspective on Power Rotation in Nigeria

Looking into the seeds of time with a powerful 2020 binocular that can foretell a successor in 2023?

2023: Another Perspective on Power Rotation in Nigeria

Amotekun has been the dominant story in the week, with particular reference to the extent it problematises Hisbah as well as the anti-climax in the build up around it. The anti-climax under reference is how all sides are, so far, standing on the law. The Federal Government which outlawed the security outfit says it is out of sync with the law. The leaders of the Southern and Middle Belt Leaders Forum, (SMBLF), who made the most sensational comparative analysis by asking the Attorney-General and Minister for Justice to tell them “what makes Amotekun illegal and Hisbah legal” also stood on the law by asking the minister to seek a court interpretation on Amotekun. The Southwest which brought up the initiative is said to be heading for the courts. Threat to challenge the ban in court is common to nearly all the rejectionist positions. It is not clear if this is maturity on the part of contending interests or just putting a legal face to a problem.

Is this a case of ‘Regional shield or regional militia: Amotekun and the politics of meaning?’

Anyway, in the piece below which bears the stamp of what the younger elements are thinking, Saleh Ibrahim Bature takes on a different subject but which might actually be the underlay of all the commotion. He gives his own opinion thus:

Eight months after the swearing-in of President Muhammadu Buhari of the All Progressives Congress, (APC), the debate on which part of the country will produce the next President has begun. South-east feels cheated and complains of gross injustice for denying her the chance to lead Nigeria. South-west has agreed that 2023 is her’s and that she will clinch the baton of leadership of Nigeria. North, whose son is in his second term as the president, argues that there should be a level playing field is, silently for now, arguing that the south mistreated it by not obliging another northerner to complete Umaru Musa Yar’Adua’s tenure. And that it, therefore, has years left to equalize beyond 2023.

While the three major contending geo political zones populated by the Hausa, Yoruba and Igbo ethic groups respectively would want to hold on to power, other groups who, as minority, are edged out of the power equation, are oiling their political guns. The three predominant ethnic groups have arrogated to themselves the prerogative of leadership of Nigeria.

It could be a season of migration to the Southeast!

Yet to sound its own presidential trumpet for 2023

Zoning and rotation in our democracy as consensus mechanism acted to limit electoral choices for presidency to southern candidates in 1999 but it has worsened the problem of ethnicization of democracy in Nigeria. To placate the South-west, the northern political establishment led by former military President, General Ibrahim Babangida conceded the candidature of the then largest political party in Nigeria, the People’s Democratic Party (PDP) to another retired General, Chief Olusegun Obasanjo. This compelled other candidates from across the country who had indicated interest to contest under the banner of the PDP to back down for the party’s anointed candidate. Since then, zoning has been taken for granted or an automatic access for those who manage to garner regional consensus without bothering to satisfy national consensus.

To all intents and purposes, zoning reinforces ethnicization of democracy. It encourages dichotomy and uses it as a currency to trade in political expediency. I hold the opinion that there is no region that lacks competent people to rule. For this reason, political offices should not go to any one because of their ethnic origin but by the promise of what their candidacy represents for the nation’s common good. We should consider any candidates who want to have a shot at the presidency on merit not on ethno religious or geographical consideration.

To run a complex nation like Nigeria is not in any way easy. One must, therefore, prepare for the task. The politician who wants to be Nigeria’s president must be able to reach out to all parts of the country, sell his brand and convince Nigerians that he is someone they should trust with power. Running a country is a serious business. It is for those who are endowed with political savvy, not for charlatans, local or ethnic champions or lazy bones who harp on zoning and power rotation to achieve a political end.

I understand the clamor for rotation by some sections in the country. The issue is a matter of life and death to some unscrupulous politicians and their uninitiated followers. It is borne out of the mutual mistrust, fear and suspicion of each other among regions, religion and sections. If we as Nigerians believe that we are one people who have one country in which we have a sense of belonging, it wouldn’t matter who becomes the president.

Our country has been dancing on the brink for rather too long. As today marks 50 years of the end of the civil war in Nigeria, our mutual distrust and utterances show that we have learnt no lessons from the bitter experience of the war.

All roads leading to the last time it will be ever ‘sai Baba’ again in Nigeria? 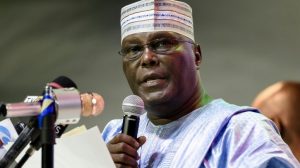 Power shift has always been the topmost cleavage that create the deepest chasm among Nigerians. The mindset of Nigerians about who becomes the president has to change. Almighty God blesses Nigeria with competent men and women in every zone who can lead the country. Our junior sister African country, Rwanda, and Singapore in South East Asia, are two examples of countries that have conquered ethno cultural politics. We can take a cue from them. Nigerians, young minds at kindergarten, primary and secondary schools should be taught patriotism. We should not limit love for the nation to singing our national anthem or celebrating particular national days. Patriotism should be about respecting the nation, the people living within its boundaries and every aspect that builds the country.

This might create a future generation of selfless, informed, cosmopolitan and patriotic Nigerians, who have the nation at heart and have what it takes to set our country on the path of progress and development.

Saleh Ibrahim Bature is an Abuja based freelance journalist. He is reachable via baturesuba@yahoo.co.uk as well as on +2348038896186