The challenge of success

Challenges for Prof Isaac Olawale Albert as Students, Practitioners and Admirers of Peace Celebrate Him

Activists of the Peace and Conflict Studies scholarly space descended on Abuja FCT yesterday to make a public presentation of a book in honour of Professor Olawale Albert, accurately referred to as the doyen of the field in Nigeria. Students, activists and admirers of peace as well as political leaders such as Senator Ibrahim Shekarau and Dr Babangida Aliyu gave the occasion its stature.

It is a tribute to him that almost all the contributors to the book have benefitted or interacted with him one way or the other. Prof Albert is all about scholarship, an arena he has made his own waves. If he’s not fond of self-writing and blowing his own trumpets, it is just his nature. In spite of all these, if you have something that he has to sign, you can approach him on the main avenue, he will sign it for you there and continue his movement. So, in academia, in intellectual innovation and in persona, he has shown worthiness in learning and character even in a hollowed environment like Nigeria where the ability to humiliate and suffer others is how power is defined. He may not be an angel but he is a success in making the good part of him dominate the evil part, that being the big battle every individual fights throughout his or her life.

The presence of his students, (former and current), peace practitioners, politicians and those in love with the field of Peace Studies confirm all that have been said above. Those who, therefore, conceived of the book in his honour deserve their own share of commendation. In the very anti-intellectual environment in Nigeria today, that is a good case study in ‘never say die’. But putting out the book inherently implies identifying and tidying up the loose ends too.

One of such must be a work, best if it is an academic essay, that ties up Prof Albert’s works in Peace Studies and announces his theoretical and methodological location in the field. He has done so much, cutting across History, Anthropology, International Relations, political violence, identity and violent conflicts, amongst others. Great but all these must speak to a theoretical homestead and the associated methodological track in Peace and Conflict Studies or risk being washed away by more powerful currents. It is not Prof Albert’s job to do this but the task of one of his more heady students to accomplish. Even as the giant of a scholar that someone as David Harvey, the Marxist geographer is, it was only in 2010 that such a tracking of his works was done. So, it is not late yet. 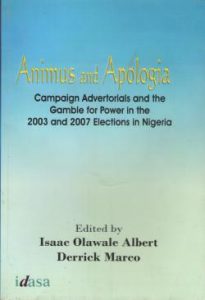 The second point is a challenge for Prof Albert as a person. Fortunately, he is in a position to take this head on right now. He is already a professor, has moved around the world a lot and has met quite a number of people here and there. Peace Studies in Nigeria is highly underdeveloped, theoretically famished and methodologically unguided. Much of the developments in post Cold War scholarship or grounds for knowledge claims are still not part of the training. This is not unique to the field. It applies to every sphere of academia in Nigeria with the exception of very, very few departments, disciplines and universities. But it is worse with Peace Studies because it is a much newer field than say International Relations/International Security, Political Science, Sociology, Linguistics and Psychology from where it emerged. The National Universities Commission, (NUC) which should have insisted on inserting the missing links is happier with non-essentials typical of other regulatory agencies in Nigeria. It means that only certain individuals who have had the advantages that an Albert has can fill the gaps. Without filling those gaps, Peace and Conflict Studies will continue to be seen as a field where students learn magic in problem solving theory. That is problem solving theory as password for status quo scholarship in the sense in which Robert Cox talks about it when, in fact, Peace Studies should be about the conditions of possibility for producing peace.

It does not entail any fundamental restructuring of what exists but it must work on incorporating knowledge of recent meta-theoretical convulsions in the social sciences in relation to Peace and Conflict Studies. Otherwise, the country has no chances of benefitting from the potentials of the field and the older disciplines from which it emerged will continue to enjoy differential stature. Already, International Relations which has so quickly internalized the anti-foundationalist logic has made so much progress on that account as to be so far ahead of Political Science, for example. Why should it not be Peace Studies that should have made such progress in a world of violent confrontations on a scale unseen before?

In other words, it is time to consolidate Peace and Conflict Studies, consolidate its ownership from disciplines where it has resided in fragmentary forms and create a distinctively critical knowledge space in Nigeria. Prof Albert’s ability to seize the initiative the immediate post Cold War opened up as far as a field such as Peace and Conflict Studies is concerned is on call again. Working through the UI structures, colleagues across Nigeria and the regulatory authorities, this challenge is no challenge at all, if the past is anything to go by. Once again, thumbs up for Prof Isaac Olawale Albert!

Honourable Dimeji Bankole’s Inside Account of an Alternative Strategy