Posted By: adminon: September 03, 2019In: SpectacleTags: No CommentsViews:
Print Email

It is not clear what Governor Atiku Bagudu of Kebbi feels now for orgnising the 28th Anniversary of the creation of Kebbi State. Unless he is a believer in frank talk and critical analysis, he might not be too happy for bringing in Bello Bada, a Professor of English at the Usmanu Dan Fodio University, Sokoto and obviously, an indigene  of the State. 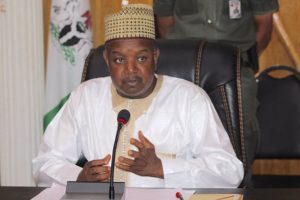 Added to the youths taking to the streets to protest prolonged darkness following their suspicion that some actors have blocked their 24 hour electricity supply trade off, it might not have been such a good week for the governor. This is particularly so that it is understood that other dignitaries who spoke at the occasion were all against His Excellency. And they included General Ishaya Bamaiyi, a former Chief of Army Staff, (COAS) and Justice Usman Mohammed, a former Justice of the Supreme Court. It all suggests that everything is not ok in Kebbi State too as in many other states in Nigeria. The difference might be that, unlike most others, many of the intellectuals are in the good books of their governors.

If the Kebbi State governor is an unhappy man this week, he has no one but himself to blame: doesn’t he know how to pocket intellectuals? Or, is it the case that the Kebbi intellectuals are so resistant to being pocketed?

Anyway, so eloquent is the speaker that it is considered best to allow the tape to roll: