Methodology is the graveyard of knowledge production. There can be never too much of it. It was thus nothing surprising when the authorities of the university called out all academic staff to a two-day re-engagement with the scientific enterprise March 21st and 22nd, 2019. What was surprising was the sensibility underlining the selection of the resource persons. There were two of them. One is Prof Emeka Aniagolu while the second is Prof Ode Ojowu. Each of them stands in a position to deliver in terms of subject-matter mastery.

Aniagolu, though tightly wired to the Nigerian intellectual space, is still an away scholar. Currently at Ohio Wesleyan University in the United States, Professor Emeka Aniagolu has taught across American campuses and written as well as spoken on culture, especially the Achebe legacy. The second resource person is Prof Odeh Ojowu, one of those who built up the Ahmadu Bello University, Zaria to the height it attained in the global intellectual square. In his own case, he could not even wait after correcting his PhD thesis in the United States to join ABU, Zaria. The pull of the ferment of ideas back home, back in Zaria then was so powerful that those like him could not but rush back immediately they were done with the doctoral thesis.

It was not only Nigerians that were beaten by that bug. Prof Okello Oculi was then a young Ugandan doctoral student at the University of Wisconsin in Madison. He asked one of the big name scholars there why he chose to write his thesis on Nigeria. The famous scholar replied that Nigeria was the country the world was waiting to stage a big arrival on a global scale. Thereafter, there was no stopping Oculi, an unrepentant Africanist, from making Ahmadu Bello University, Zaria, his homestead. Too many others did no less.

The view at the time in the United States as reflected in their newspapers, magazines and academic discourses was that Nigeria was destined to make the leap from promise and potentials to actuality in terms of greatness very quickly. The Americans were not as skeptical as the British whose view was something similar to the possibility of an elephant flying as in the defunct Nigeria Airways symbol. So, when Prof James O’Connor published his paper, “The Fragility of Stability and the Inevitability of Instability”, the young military officers who mostly attended UK military academies could barely contain themselves. It was difficult for them to accept that he was merely academicising. They got him out as soon as they came to power, something he was protesting till his death in 2013.

Ojowu’s membership of that generation that came back to the country on the strength of the exciting challenges they and their mainly American tutors could see ahead is what gives Ojowu the headline of this piece. Otherwise, there are very few or no differences between him and Prof Aniagolu. They are both positivists in methodological terms, though with bits of Afrocentric lens here and there. They are both products of the American influence on the scientific enterprise. Ojowu is only fundamentally different in relation to his membership of those who ran back after being taught modernization theories in Economics, Sociology and Political Science only to rebel against that theory, with some of them becoming Marxists, others nationalists and yet others Africanists. As such, they tend to manifest a sharper sensitivity to paradigmatic complications. This came out very well at the Veritas University workshop.

A voice lamented how the though commendable scientific research exertions at Veritas University, Abuja still left out the post-positivist orientation, expressing the hope that Prof Aniagolu would come back to deal with that gap. Aniagolu did not directly comment on that, saying it was a comment rather than a question. He appeared to think it was up to the university to deal with it the way they feel. Ojowu too but he also said something. In the manner of an Idoma elder drawing a heady youngster’s ear wide apart to sink in the message for caution, Prof Ojowu asked this reporter if he has read Thomas Kuhn’s The Structure of Scientific Revolutions. Yes, replied the reporter. Whether he was convinced or not was not clear. He simply went ahead to say in his own words what another Professor of Political Science of his generation had also told the reporter in mid 2013: paradigms shift but don’t be deceived by all the talk of great welcome for upturning a theory or exposing cracks in a paradigm. A young bright chap who could show that emperors of a paradigm are actually naked because some anomalies have become too obvious could be risking his or her life. Ojowu added: even if established names in scholarship know the new post-positivist meta-theoretical framework, would they agree to teach it and then consciously undo their authority and prestige? 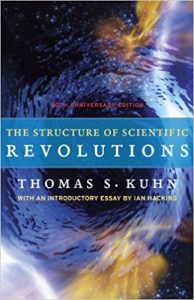 hat is exactly what Thomas Kuhn says in his book. Prof Aniagolu had mentioned this problem earlier in his presentation. His point is that all paradigms habour anomalies. He exemplified with the collapse of Newtonian Physics and its succession by the theory of Relativity in Physics. So, paradigms do shift. The point between when the anomalies start manifesting and when a shift from a dominant to an emergent paradigm occurs is what could be deadly for those who cross the ‘losers’ wrongly.

The point is that due to their big wrestling with modernization, members of the Ojowu generation have a common sensitivity to paradigm tussles far above the generations that followed theirs. The emergent African universities – Ibadan, Makerere, Dar es Salam, Zaria, UNN and so on provided that generation the point to stand and move the world, so to say, making that their marker in terms of pedigree just as the generation after them had theirs in radical nationalism substantially informed by but not only Marxist scholarship. That is the tragedy in the manner neoliberalism has so powerfully edited and re-asserted modernization theory in our universities today without most of the contemporary scholars being able to challenge it, be it at the level of methodology, theory or alternative policy and models.

At the workshop, for instance, Prof Ojowu devoted three full pages to ethnographic technique alone. That must say something about his generation’s high regard for the wonders the technique brought to the study of peoples, culture or identities although it was deployed for most times as an instrument of power against Africa. But, even then, it can be said that much of the gamut of post-positivist research today is traceable to the logic of ethnographic technique: the idea that the subject is the more dependable source of data or that discursive data counts more than quantitative data in establishing meaning or truth because truth is contingent. Surprisingly, no one in the audience raised questions about the colonial intelligence gathering that ethnographic technique became for European imperialism in Africa, how it helped them develop the problematic ethnic profiling such as those who are warriors and those who are not and which are utilized by conflict-preneurs across Africa today.

One point is how members of that generation teach, if we can generalize from Ojowu’s self-presentation. They do not jump about in the class as we do today in the name of making teaching interactive through dramatics. No sternness was observed. There was no posing or puffing. Nothing artificial! Just himself – sober and solemn! A very funny but original joke which got everyone laughing and on which crest wave he rode on for nearly two hours in the first instance!

Lastly is the point about how nearly all of them in that generation neither made money nor humiliated themselves to be given political appointment – Omafume Onoge, Essien Ndom, Okwudiba Nnoli, Eskor Toyo, Claude Ake, Isawa Elaigwu, Bala Usman, name them. Yet, they are the ones looked for, both by the powerful as well as the younger ones following them for the sort of values both sets lack and are seeking. Ojowu served as Chief Economic Adviser to the Obasanjo regime in the mid 2000s. It would be stupid to say that merit took him there because, merit, like beauty, is in the eye of the beholder. But it was not obsequiousness that took him there either. One of the factors that took him there must be what he said when he came to plagiarism in the course of his lecture: “you are a thief when you take someone else’s ideas without giving credit”. Professors Ojowu and Aniagolu stood shoulder to shoulder on this, with Aniagolu extending his canvas on ethics of research to care for animals. In anticipation of a question on why researchers must do that, he said it is because what you do to animals shows your level of being a human being or some words like that.

These were the sort of resource persons the pathfinders running the university found. At this rate, it might not take too long before the university realizes the ambitious radius articulated for it by its key stakeholders. Prof Mike Kwanashie, the immediate past Vice-Chancellor once said Veritas University seeks to be the intellectual hub in Nigeria. Prof Hyacinth Ichoku, the incumbent Vice-Chancellor said on the first day he took over that a great university is the destination. One of the Bishops has been reported at saying that Veritas University will be the Harvard of Nigeria. Something about the confidence of success that often leads to success!

Why Theirs is Different

Commander Ajenu’s Religious Touch to the Military Intervention in Idomaland

The Task Innocent Chukwuma Left for Us to Complete