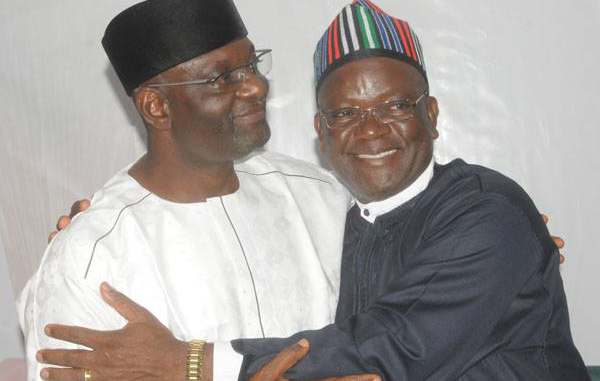 It is a headline writer’s nightmare. “The Democratic Dilemma of the Benue People” won’t be a bad idea just as “Benue’s Mother of all Battles” would equally be a perfect fit. “The Impending Clash of Irresistible Narratives” would also be acceptable. In all cases, what is being conveyed is the deep value difference between the two opposing but nearly balanced camps seeking the governorship of the state, come March 9th, 2019. 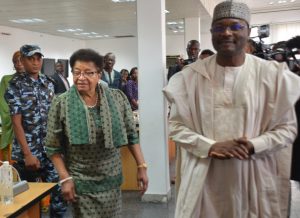 So deep is the difference between the incumbent and the challenger that the element of dilemma in democratic choice for the average Benue voter in the governorship election comes in. Voters have to make a choice between two contextually appealing narratives of their recent existential reality by the contestants. Which one will carry the day is the basis of the fascinating wait for the outcome, provided the election is free and fair. But, who would make free and fair election to happen there? Perhaps, all monitors and observers should head for Benue State during the March 9th Governorship Election. Their presence could mitigate what the governor is sensing in terms of deployment of troops to the state whom he believes would assist Senator George Akume to manipulate the election. But hardly had the governor made the allegation before some people started whispering to him that civil servants, especially those in the Government House, Makurdi Ward which no seating governor has ever won, could be deadlier than troops from Abuja. It is another way of pointing out that owing various components of the civil service unpaid salaries could be more problematic for an incumbent than some soldiers from Abuja even as militarization has been a major point of protest in the presidential poll.

Every allegation against anyone by the governor or against him by his critics gets such a reply. It is just as where critics of the governor are saying that he is not allowing the people at IDP camps to return home for political purposes. The governor’s handlers reply them by asking if there are any homes to which the IDP camp dwellers could return should they be allowed to go. The IDP camps are serving as reminders of the reality of herdsmen violence experienced across the state in the past three years. Those marking Governor Ortom closely accuse him of using “Born Againism’ as a cover for reprehensible activities, his camp replies by asking if that makes sense since it is not possible for the governor to use ‘Born Againism’ exclusively for bad things. After all, a man with the sobriquet of “the defender of the Benue Valley” cannot be associated with only nefarious activities.

The sobriquet is what has framed Governor Ortom as a savior, the man without whom the Benue Valley would have been overrun by invading herdsmen. It is with the sobriquet his ideologues and campaign managers hope to and could say they are moving mountains. The argument is that the people of Benue State should not allow Ortom to be defeated because to do so is to allow ‘outsiders’ determine who governs the state. Typically, it is an argument with the other side because President Muhammadu Buhari, the outsider perceived to be imposing Hon. Emmanuel Jime of the APC is also the one who helped Ortom to consolidate power. How did this happen? Initially, the president had argued that, like him, Jime should pursue justice in court for being denied the APC governorship ticket for Benue State in 2015. Later on, party intelligentsia started drawing attention to the likely outcome of the suit, based on analysis of precedence. It was then that the pragmatic implications of the president’s idealism began to dawn on the APC. That was how Jime was then persuaded to withdraw his case and after which he eventually got appointment as MD of the Nigeria Export Processing Zone Authority, (NEPZA). Not only was the settlement in front of the president, Jime’s appointment could not have been possible without presidential approval. Without Jime being off his neck, Ortom could not have consolidated power. So, the narrative of outsider or ‘outsider’ being allowed to decide who governs Benue State is as discursive as they come. 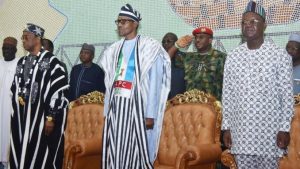 This is more so that Ortom and President Muhammadu Buhari share certain things in common in each’s quest for re-election even as the two are now bitter enemies. Both have not been stellar performers in their first term but both have got a great story to tell as to have attracted supporters for themselves. For Buhari, it is that he has a mission to wipe Nigeria clean of corruption. For that populism, he is the hero of millions. For Ortom, it is that to rid the Benue Valley of invaders is a task that must be done. So, both Buhari and Ortom are selling a powerful intoxicant at each’s own sphere of influence. While Buhari is at national level, Ortom is operating at a state cum cultural and regional level.

Is Ortom telling the truth about he being the defender of the Benue Valley? Unfortunately, the sobriquet is not about telling the truth or otherwise but about a language game aimed at acquiring power through the image by which voters will understand Ortom as to vote for him or not to vote for him on March 9th, 2019 governorship contest. In fact, whether he wins or not depends on the acceptability or otherwise of this narrative, irrespective of whether he has been a performer or not, irrespective of whether he has a backlog of unpaid salaries or not.

The point is that the law against open grazing has made him a hero in Nigeria. It is a matter of perception. Those who experienced both the ‘herdsmen’ violence and the herdsmen violence will never fail to see him so. The tricky question is whether herdsmen violence justifies non-payment of salaries which is now the big roadblock between him and re-election. The question is important because, as is being pointed out, herders as well as non-payment of salaries kill in a state such as Benue State where alternative modes of survival are minimal or non-existent even.

In fact, it must be Ortom’s own extraordinary brilliance in propaganda as well as the quality of the intelligentsia around him that has brought him this far. His verbal facilities put him in a class of his own. His ways with The Bible are discursively impeccable. The representational warfare competence of his team is fascinating. Imagine how they constructed a special cemetery for victims of herdsmen violence, presenting a morbid reminder which implies its own prescription. Even with much, much smaller resources compared to the Federal authorities, he inflicted terminal propaganda wounds on his traducers. Would he live to tell the story? A number of factors will decide the answer.

He has an enraged ex-godfather to contend with. Enraged in the sense that Senator George Akume lost his bid to return to the Senate in the presidential/NASS poll. What that means is that Ortom did not work on mitigating Akume’s sense of injury from the break in their relations. Two, there is this unclear dimension that might work against him. It is unclear to the extent that it might be no more than a stereotype. The claim is that, traditionally, the Tiv cultural identity does not believe in the idea of Second term. What they believe in, according to the authorities on such matters is the ideology of “eat and give to your brother’. “So, except in very few cases of well entrenched politicians, it is not usual to see people enjoying more than one consecutive term in office in Tiv politics without some abracadabra to it”, Intervention was told. Whether this is true or not is not what is important here. What is more important is how that can be woven into a narrative that can hurt Ortom’s electoral chances. 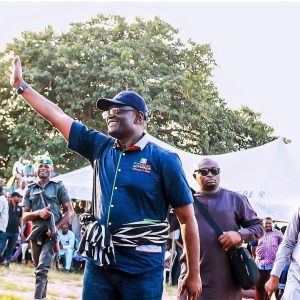 Riding into town on an inclusivity stallion 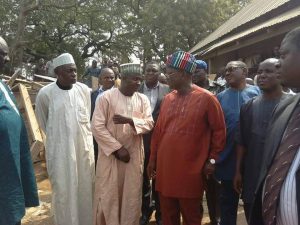 Three, Emmanuel Jime of the APC or the APC itself is riding into town on a stallion. The stallion is the distinctive response to the issue of inclusivity in Benue politics. That is how to give birth to a government that is in itself re-assuring on belongingness for each of the two dominant ethnic groups in the state. That is a government that is inherently or self-evidently guaranteeing of inclusivity as to diffuse all suspicions and mistrusts, with particular reference to the Idoma feeling of exclusion from exercising leadership at the governorship level. This has dodged politics in the area.

Whether this was the hard choice issue the APC considered in deciding it candidates for the governorship is a different issue but now, they have a fascinating combination. Barrister Emmanuel Jime, the governorship candidate, is married to an Idoma lady. The implication is that, no matter how bad, Idoma people feel they would be secure under his governorship. With a marriage which has produced children, there is a limit to which he can harm the Idoma interest even if he wants to because he would end up hurting his children if their mother is unhappy. In any case, we are told the two married out of love, meaning that hurting options would be avoided. For many, that is the unique selling point of the Jime candidacy. The second side of the package lies with his deputy, Sam Odeh, who has a Tiv mother and would never want to hurt the Tiv, his mother’s people. So, as the reasoning goes, APC ends up with a pair that offers Benue State the best guarantee for inclusivity they never had before and might not have again for a long time.

Above all, it is not as if Jime hasn’t got basic populism. He does. In truth, he is largely perceived to have the interest of the people at heart. The element of enlightened self-interest would work in his favour. That is, he is the sort of person who could say that for the survival of the system, let certain things be done. It is the absence of this instinct among many political leaders that has made the system illegitimate.

It is not as if Ortom doesn’t have any advantages to call on. Ortom has a number of advantages. One of it is that the major power players in Benue politics are with him: Senator David Mark who though now wears the toga of a statesman is, nevertheless, a PDP member; former Governor Gabriel Suswam, Senator Iyorchia Ayu; Abba Moro; Margreat Ichen and many mountain movers in matters of winning and losing election in Nigerian politics. Two, he is an incumbent. An incumbent at the state level might not boast of power over repressive state apparatuses but he can boast of deeper knowledge of local resources and how to mobilise them one way or the other. The question is how far this advantage would go. This is more so that his challengers too have their own bigwigs. Senator Akume has been mentioned. There are several others.

The Jime-Ode pair is also favoured by federal exposure. While Jime was head of a strategic federal establishment for four years apart from being a one-term member of the House of Representatives, Sam Ode, his deputy, has been a minister of the Niger Delta ministry. So, federal exposure speaks well for them. They are all educated, much beyond First Degree, a big plus. And there are no corruption charges against Jime and his deputy-governorship candidate.