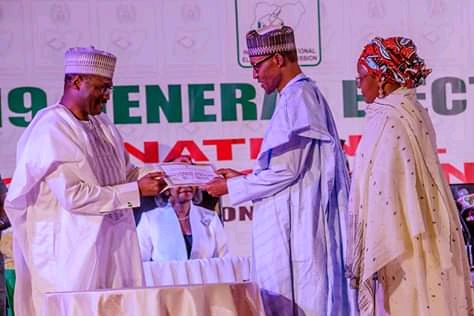 President Buhari being certified the winner

The Civil Society Legislative Advocacy Centre, (CISLAC) is looking forward to seeing re-elected President Buhari and members of the National Assembly urgently embark on what it calls appropriate policy reforms that will guarantee electoral transparency and all-inclusive development. The Abuja based NGO listed five such reform areas in a congratulatory message to the president and all elected members of the National Assembly. They include security reform it calls for strengthening of the security architecture to respond to herdsmen violence; insurgency, criminality, kidnapping, rural banditry; fiscal regime reform involving proactive steps on the nation’s economic activities, starting from the oil and gas sector through the targeted Petroleum Industry Reform, as well as transparency and sanity in the tax administrative processes; social sector reform to revitalize and revamp the sector with particular reference to management of disease outbreaks and surveillance, emergency handling and recruitment of medical expertise.

The statement signed by Auwal Ibrahim Musa also mentioned the anti-corruption war where it wants strengthening of Anti-Corruption Agencies (ACAs) as well as complying with international anti-corruption frameworks in the war; enhancing cordial working relations between the Executive, Legislative and the Judicial arms for effective governance and development. The statement calls on the president to walk his talk about ensuring an inclusive government as expressed in his acceptance speech. “Any act that should create a perception of his government as having ethnic, religious or regional colouration should be avoided as he is the President of all Nigerians”, said CISLAC

CISLAC is among a long list of actors and players hitting President Buhari with congratulatory messages in the aftermath of his declaration as winner of the February 23rd 2019 presidential and MASS poll. Others are the UK and several African governments. The opposition PDP is seething with rage, alleging electoral robbery and threatening to go to court.

Nigerian CSOs To INEC: It Would Be Dangerous to Alter Election Time-Table

The Ghost of Deborah and the Lynch Mob

Citizen Deborah And The Northern Crisis