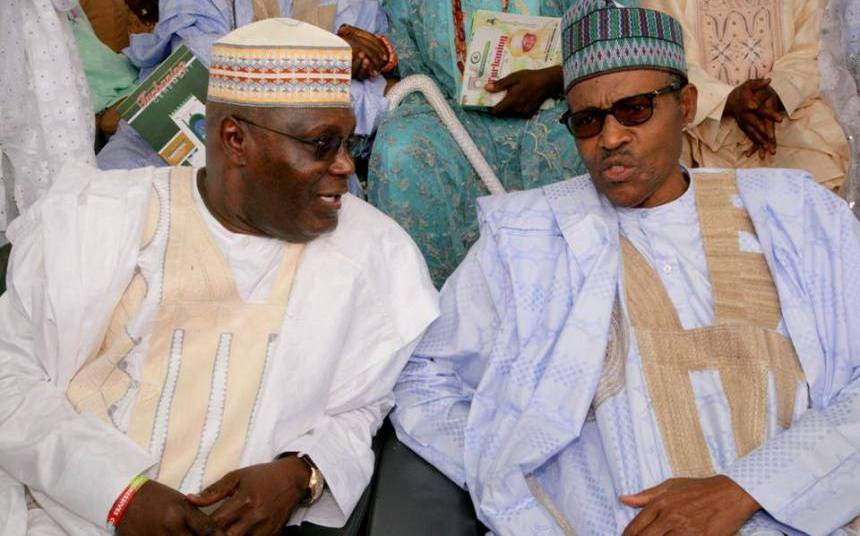 Atiku Abubakar on the left and Muhammadu Buhari on the right: One of them will rupture the other the way things are going

Posted By: adminon: December 28, 2018In: SpectacleTags: No CommentsViews:
Print Email

President Muhammadu Buhari appears to be facing the most severe challenge to his self-representation as the embodiment of integrity and incorruptible public officer in Nigeria’s history. And there is a paradoxical twist to that as the challenge is coming from former Vice-President Atiku Abubakar generally regarded by the president and his party as too corrupt to rule Nigeria. That is what presidential aide, Lauretta Onochie said last November and which the president himself repeated afterwards. But now, the president appears to be on the receiving end of missiles fired by former Vice-President Atiku Abubakar alleging Buhari’s family’s involvement in corrupt deals.

Before Abubakar, only General Ibrahim Babangida had once threatened to show that President Buhari is not what he claims to be in corruption matters but an emperor without clothes. But IBB never carried out the threat. Now, Abubakar is firing powerful missiles against the integrity claims of Mister President by asserting categorically that there are relations of Buhari who were too poor to pay their bills but who now own shares in banks and telecommunication service providers to the tune of billions in dollar terms but trillions in Naira terms. It must be the first time anyone has gone this far and he is calling for a probe of the claim.

Pesident Buhari’s classic self-representation. It is now under attack

In what is bound to turn the campaigns from a dry to a wet one as far as sense of urgency relative to escalating insecurity in the country is concerned, the presidential flag bearer of the leading opposition party for the 2019 polls says his claims are based on unimpeachable sources about members of the president’s family acquiring staggering shares in a named bank and service provider.

As with all such all involving developments, this also crept on the nation quietly on Christmas Day, December 25th, 2015 when President Buhari told his visitors from the Federal Capital Territory that the sluggishness of his anti-corruption war is due to the pace of the Nigerian system. It was a claim which the opposition candidate picked up on his radar to say that the problem is not the system but the Buhari personality make-up. And that if it were not so, the president would not have been tolerant of allegations of corruption against Babachir Lawal, the former Secretary to the Government of the Federation, of Abdulrasheed Maina of the Pension Fund scandal fame or the alleged single handedly awarded $25b NNPC contracts. Contrasting Buhari to the regime where he served as Vice-President from 1999 to 2007, Atiku said whatever failure in pursuing corruption is that of Buhari as a person and not the national system.

At this point, what most observers found interesting was how the two presidential candidates were raising the debate about agency and structure in Nigeria’s power politics. That is the age-old question of whether individuals are greater than institutions or not in the way the world works. The spat, however, moved up quickly from such a rather academic point to a shot in the bow from The Presidency saying that Atiku would have been in jail by now if the system were working. This is what has attracted the allegations of huge investment by members of the president’s family.

It is a war that is bound to escalate as there might be no ceasefire and more details or counter-allegations could flood the media. Salihu Lukman, the Chief of Cabinet of the Progressive Governors Forum, for instance, is calling Atiku’s allegations as materials fit for a Nollywood production. He is listing the allegations along with claims of Buhari as a clone, Buba Galadima’s narrative of Daura having turned into Dubai, Atiku Abubakar having obtained American visa and of a cabal controlling the Villa as “PDP’s Campaign or Fantasy” to which he says would be given a lie on February 16th, 2019. He is referring to the voting day for the presidential poll in a short piece unleashed on the social media late Wednesday.

Only God can say what set of allegations come up next on this dimension of the struggle for power raging in Nigeria. Nigeria might be the better for it!