Storylines
Home De-Escalation Why Critics Think Dapchi is a Stunt 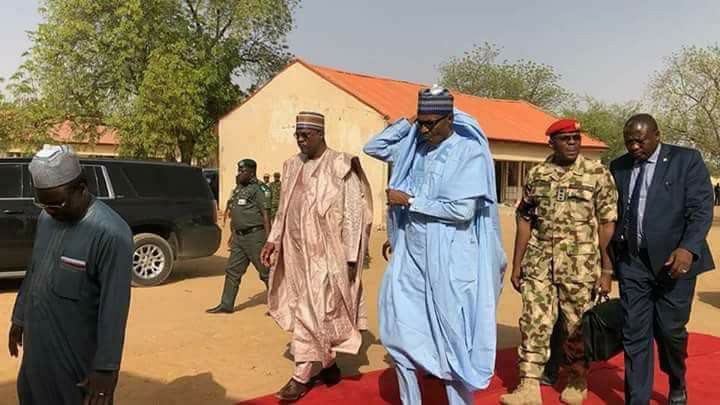 President Buhari in Dapchi: Did Dapchi happen or not?

Why Critics Think Dapchi is a Stunt

There is relief that the Dapchi girls are back, save the four that did not return but there is also a lot of thinking aloud that it was all a stunt, something stage managed.  The question is why do the critics think so? How did they arrive at this conclusion?

Different constituencies have different angles of emphasis in substantiating the claim but one constant argument in this regard is how it is to enable the Buhari regime live down the discovery that Boko Haram has not really been degraded. In other words, those who subscribe to the analysis of the Dapchi episode as a stunt argue that the abduction was arranged to enable the government secure the release and, by implication, suggest that it is still vibrant in out manoeuvring Boko Haram.

There are those who take a comparative approach in the sense that they doubt the authenticity of the Dapchi girls abduction because they ask: why has negotiation worked with Dapchi girls but has not worked in the case of the remainder of the Chibok girls? Or, was the kidnap of the Dapchi girls by a different faction of Boko Haram?

There is a third claim which is that if the abduction was real, then it must have been by a fifth columnist within the state establishment fighting Boko Haram. Although those who based their doubt on this claim are so few to come by, they are, nevertheless, persistent that the most solid evidence that Dapchi has been a stunt is that there was never the outpouring of grief and solidarity in the aftermath of the event. Critics here do not accept that it might have been so simply because Dapchi left people too perplexed to weep and organise in solidarity. Rather, they read that lack of spontaneous grief as evidence that people saw through it all.

The last large group to theorise Dapchi as a stunt are those who have a very strong belief that Boko Haram insurgency and the current spate of killings in the country are connected and they see the connection in an agenda. They argue that it was only during his visit to Makurdi, Benue State of Nigeria the previous week that the president ever used the word ‘armed herdsmen’ to refer to the suspected killers, the details of whose activities he said he always knew. To these critics, therefore, the president was admitting that herdsmen might be so powerful that even as he knew everything they were and are doing, nothing extra-ordinary has been done to stop the threat. What sort of killers might these be if not on a power game, they ask.

There are many more theories, including the president’s presence at the wedding of a son of the governor of Kano State in the aftermath of the abduction. That his predecessor, Goodluck Jonathan, equally went to dance at his party’s campaign in the aftermath of Chibok girls saga is not accepted as an excuse for Buhari’s.

Central to the question marks by the various critics is not the truthfulness or otherwise of each of the basis of doubts but how the critics even came to hold such views in the first place. One implication is that if the Buhari regime has been banking on some relief in securing the Dapchi girls, that might still elude it.