Storylines
Home Transnational Challenges February 9th, 2018 for the Big Question: ‘What Has 3 Decades of Democracy Brought to Africa? 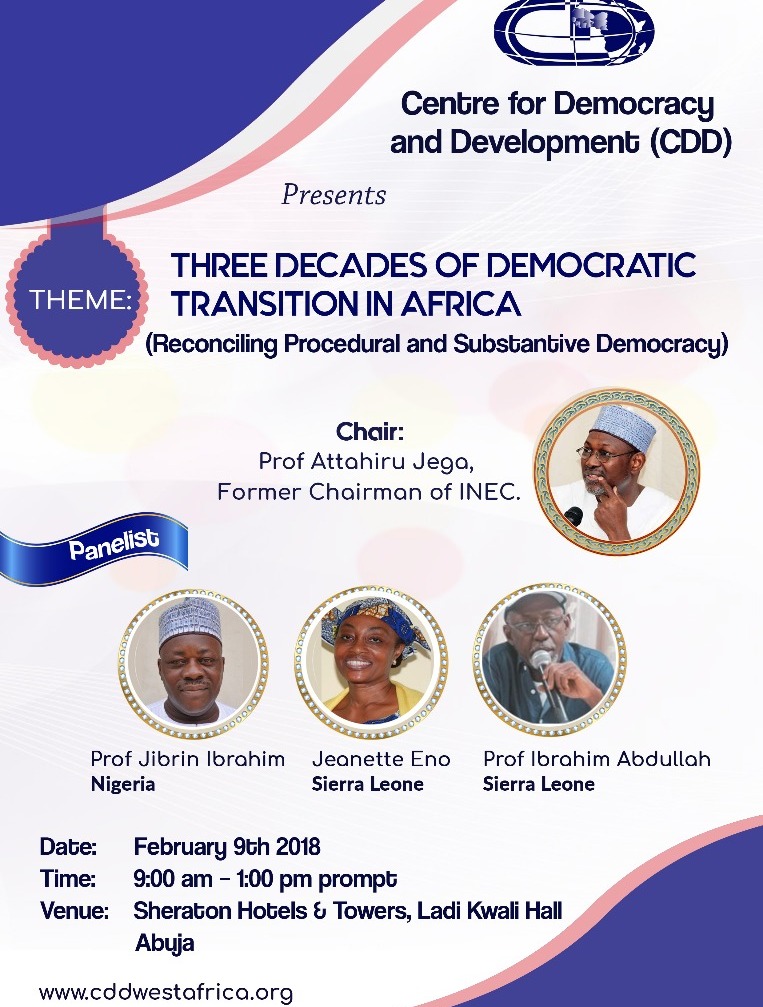 February 9th, 2018 for the Big Question: ‘What Has 3 Decades of Democracy Brought to Africa?

Although it remains unclear why there is no voice from Southern and/or Eastern Africa, it is still the continent’s date with democracy when high profile activists engage “Three Decades of Democratic Transition in Africa: Reconciling Procedural and Substantive Democracy” at an Abuja event being put together by one of the few indigenous transnational think tanks on the continent, the Centre for Democracy and Development, (CDD). The event scheduled to take place February 9th, 2018 is featuring two voices from Sierra Leone, that of a feminist/feminism and that of a Historian who’s firing from work by Fourah Bay College, (University of Sierra Leone) in 2016 had been the subject of a global protest in academia. The third is that of a relentless voice from Nigeria.  The speakers are Dr Jeanette Eno, Prof Ibrahim Abdullah and Prof Jibrin Ibrahim. Prof Attahiru Jega of Bayero University, Kano and the immediate past Chairperson of Nigeria’s electoral management body – the Independent National Electoral Commission, (INEC) will be chairing the occasion according to its flier already massively circulated.

By the theory of the performative capability of discourse or of language use, three combative activists interrogating a problematic or value loaded concept such as democracy could be a game changer, making the event in question not one of the commonplace, everyday sort of thing that goes on in the Nigerian public sphere. Those habouring this expectation have in mind the point that only Africa has yet to conceptualise and operationalise a grand paradigm of democracy uniquely hers. 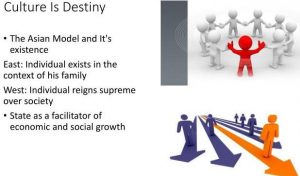 The Asians have debated democracy with particular reference to whether it sits well with ‘Asian values’. Although they have concluded that it does, they have still not gone about it in a plastic manner. Asian values still define democracy across that stretch, whether one sees this from Lee Kuan Yew’s notion of ‘Culture is Destiny’ or from what the Chinese Communist Party is doing and how they are doing it. For much of Latin America, democracy is radical nationalism or Left politics. That is why whether it is election or selection, most of the regimes are statist in theory and even in practice. This is what Brazil being under a party of labour since 2002 speaks to even as they send their former presidents on corruption trial. The West, is of course, at home with Western liberalism although, nowadays, it is difficult to distinguish between democracy and statism across the West. So, Africa is where democracy is still an unsettled question. What is it? When is it? How is it? And how might we know it is democracy?

Some people argue that History has intimidated the continent from being able to settle accounts with democracy. That could be true in terms of the false universalisms that have dominated conceptual engagement with democracy on the continent but the debate on democracy has remained alive across Africa. Interestingly, the speakers at this occasion have been active participants in that process. 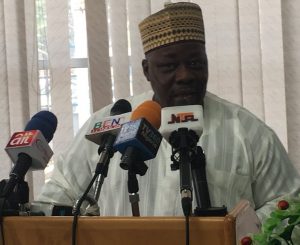 The most sensational might be Prof Jibrin Ibrahim whose “History as Iconoclast: Left Stardom and the Debate on Democracy” made a shattering entry in 1993 by attacking those he called icons of the debate for not taking ‘liberal democracy’ seriously enough even when it could have sufficient democratic content in relation to Africa’s history of repression, one man rule and unique underdevelopment. Since discourses of democracy have practical implications for democracy, his intervention both served to checkmate an unseen power in the politics of democratisation: those framing democracy. That is if his claim was itself contextually sustainable in the first case. It would thus be very interesting to listen to Professor Ibrahim this Friday after three decades of his being an activist of democracy as constitution making, human rights and popular participation through elections. 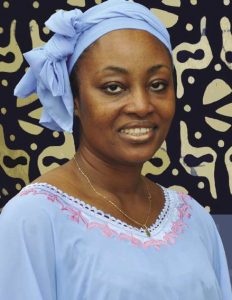 Dr Jeanette Eno: Towards a scorecard on the feminist struggle for democracy in Africa

No less interesting would be the voice of feminism on the panel. As a claim against democracy on the ground that democracy has assumed patriarchal authority, feminism does have a very strong point but how much of the feminist claim has been understood among the populace – the men, the women, the urban, the rural and the generational? What might Eno’s report on this look like, especially in relation to mass movements or political parties that can act this out? She might have the most tedious task next Friday.

Prof Ibrahim Abdullah from Fourah Bay College provides a completely different entry point in this assessment just because he is still actively engaged in academia. Africa’s future lies with today’s undergraduates across the continent because, in another one or two decades from now, none of Friday’s panellist would be active participants in the public sphere. They would be too old to do so. Who replaces them? Today’s undergraduates! But, are today’s undergraduates being prepared in such a way that they can competently replace them? The answer is silently No. But, to what extent is the No the case across the continent? Is the situation basically the same or there are significant variations? If the variations are significant, isn’t internal colonialism an inevitability on the long run as there is no way those with better or more advanced knowledge would not pounce on those with little or nothing in a world of capital? That is beside the miracle of expecting an uneducated Africa to have competitiveness on a global scale. Prof Abdullah might tell a more ‘hope-inspiring’ story from Sierra Leone.

Whichever way it goes, it seems Friday would be a tough session. There is likely to no easy answers. The good thing though is there is a chairman of the occasion whose power of the chair could add value. An activist scholar who has taught, among others, ‘Political Economy of Africa’ before presiding over an election management moment in Nigeria, Prof Attahiru Jega does have the pedigree to preside over an even inherently wicked topic as the organisers have chosen. That is if he is more rugged or agitated and less calm on Friday.

The Politics of Federalism, Indeed!

Federalism and Restructuring: The Choice for Nigerians (2)